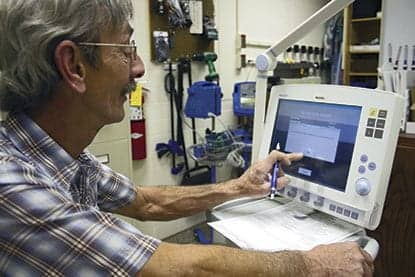 Dennis Flowers performs an inspection/preventive maintenance on a patient ventilator.

The small group at Wilson Medical Center fosters an enormous drive, tight teamwork, and expanding skills to manage a big inventory that continues to grow

At Wilson Medical Center, Wilson, NC, the medical device inventory numbers 4,500 and continues to grow. The clinical engineering department is responsible for all of this equipment, whether managing a contract or handling service and maintenance in-house. The team is small, numbering only five: one manager and four biomedical equipment technicians. Simple math indicates a rather large equipment-to-technician ratio—1,125 devices to one technician, to be exact.

One might expect such a heavy workload to become overwhelming, frustrating, or perhaps discouraging, but the reality is quite the opposite. The team uses its small size to its advantage: they are flexible, hands-on, and innovative. Together, they are able to manage the inventory, expanding their services and, correspondingly, their value to the organization.

“We may not be the biggest department, but there is no reason why we can’t be the best,” says Jim Downing, CBET, manager of Wilson’s clinical engineering department.

The technicians maintain their edge with training, staying up to date with the latest in medical technology through constant education. “When new equipment is being explored, some of the first questions asked include, ‘How will we maintain this device?’ and, ‘Is it applicable to have education dollars built into the budget?’ ” Downing says. 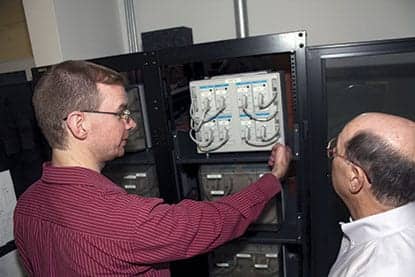 The answer to the question of education is frequently yes, and the team members regularly take advantage of opportunities for the health care organization’s overall benefit. In-house service very often translates to cost savings, both direct and indirect.

What the team does not completely service, they have their eye on for the future. And helping their efforts is the ear of the administration, another advantage of their small size. Downing tells a tale from one of the institution’s annual events: Every year, a week of organizational team-building activities is brought to a close with picnics during which management mans the barbecue. During his turn, Downing spent 2 hours flipping burgers and discussing strategic initiatives with the chief information officer in open one-on-one communication.

Those 2 hours were highly productive and indicative of the types of informal meetings that help to further the department’s reputation and credibility. When faced with a problem, they come together to bounce ideas off of one another.

“Everyone knows his idea may not always be the best one, but we put everything on the table because, sometimes, a combination of suggestions may be molded into a single solution,” says biomedical equipment technician Dennis Flowers.

There Is an “I” in Biomed

This does not mean that everything is done by committee. The technicians have developed specialty areas and take on projects individually as skills and schedules allow.

Work orders come in from clinical teams via an entry system that leads into the biomedical database, which prints the orders out. “We have a rule that we respond to a work request within 15 minutes, even if it’s just a phone call to the floor and not the on-site response,” Downing says.

Emergencies are handled immediately (of course), and if the technician who covers the area is unavailable, another tech will step in. “We rarely have to ask for help—someone typically offers it first,” says Matt Strickley, CBET, another biomedical equipment technician on the Wilson clinical engineering team, who also has an associate’s degree in biomedical electronics technology.

Although everyone works autonomously, the department is small enough that everyone easily stays apprised of individual and departmental workflow status. “When we have a meeting, everyone is usually able to attend,” says Steve Manning, biomedical equipment technician.

When out on the floors, they stay in touch via an in-house communication system and cell phones (handhelds were found not to be ideal for their needs, according to Manning). The biomeds deal with vendors and other outside callers via mobile devices so that calls to the shop and manager numbers do not become unnecessarily overwhelming. 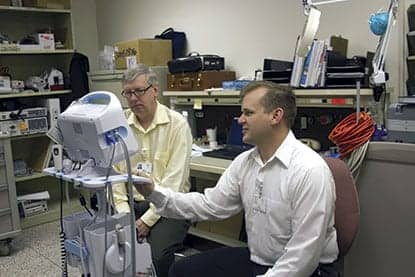 L-R: Steve Manning and Joe Conaway review a monitor configuration on a noninvasive blood pressure monitor prior to integration with the hospital’s EMR.

Similarly, the team has modified its database so that the system is better tailored to their needs. “The database could become cumbersome because users might need to open several different windows to access all the relevant data they sought at any particular time,” Strickley says. He developed the necessary computer science and information technology skills needed to modify the program so that it was more functional. “We can now create data queries and reports in one screen for easier and quicker viewing,” Strickley says.

The impact has been significantly positive for everyone’s workflow. Manning notes work order lists and PM reports are easily customized and quickly delivered routinely. Downing adds that he can now prepare the reports he needs for trimester safety committee meetings in 30 minutes, rather than 3 hours.

Naturally, the Wilson biomedical department applies this same can-do attitude to the work it completes for its customers. The team is about to go live with a project that integrates telemetry monitoring systems for about 145 beds into the electronic medical record. “The major objective was to allow the nurses to spend more time at the patients’ bedsides,” Strickley says.

The project first came under discussion several years ago but was not placed on the organization’s project list until last year. Interdepartmental meetings started this past summer. Strickley found the greatest challenge was getting total agreement from a group of people with very different backgrounds and objectives, but the interdepartmental teams at Wilson typically manage to do it.

When large capital acquisitions or projects are undertaken, all of the impacted departments play a role. The biomed department is routinely charged with equipment evaluation and demonstrations, from the maintenance and service perspective as well as how the device(s) fit into the hospital’s infrastructure.

“There is no equipment across the spectrum of departments that comes in without some sort of evaluation process,” Downing says. If the equipment warrants it, machines are brought in-house for hands-on demonstrations and evaluations.

When a decision is made, a plan is created. The clinical engineering department will typically take ownership of the equipment and manage the installation and any necessary testing. For the telemetry-EMR project, Strickley completed testing that began with simulated vitals and will be completed on one patient live before being rolled out to the floors.

A similar process has been followed for the integration of infusion pumps and vital signs monitors, both expansive projects requiring their own interdepartmental teams—and both equally as successful in saving nurse time and therefore satisfying in-house customers, according to Downing.

Naturally, nursing and IT can be expected to be at the table for these types of projects; nursing education is also likely to participate. As for many biomed departments, collaboration with IT is becoming as routine as collaboration with nursing. And, as many health care technology management departments are discovering, both groups have a lot to learn from each other. “We’ve given the IT group tours and walkthroughs that have helped them to understand the clinical impact of our work, and we, in turn, learned quite a bit from them,” Downing says. 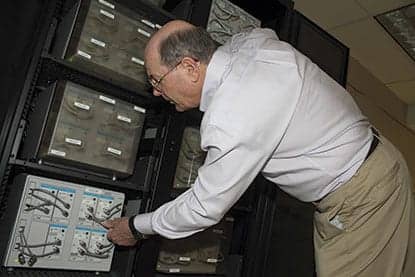 Jim Downing checks the performance of a telemetry receiver in the central monitoring unit.

While the biomedical team is acquiring networking skills through cross-training opportunities with IT and independent study, IT retains responsibility for network issues. However, biomeds will handle the first calls for a device unless a networking problem is obvious (eg, evident throughout the system).

If the device is the cause, IT does not need to get involved. “We’ll troubleshoot the machine to determine why data is not getting to the server and repair the problem,” Strickley says.

The protocols for the new systems are still being refined, but the technicians have already begun the process of education. Strickley and Joe Conaway, biomedical equipment technician, and the final member of the team, have already completed training on the new telemetry systems; Manning will be up next.

Because the devices are enterprise-wide, Downing would ultimately like everyone to complete the vendor training. The Wilson commitment to education is serious. Downing runs through a lengthy list of coursework (ranging in length from 3 days to 2 weeks) completed just in the past 3 years as proof. Examples include the telemetry seminars already mentioned in addition to classes on anesthesia systems (Strickley and Flowers), infusion pumps (Strickley and Conaway), ventilators and ultrasound systems (Flowers), ICU and critical care beds (Manning and Conaway), electrosurgical devices (Flowers), and flexible endoscopes (Conaway).

The work done in flexible endoscopes alone has saved the hospital a significant amount of money, Flowers says. The program is new and unusual for a small facility, but the savings have been worth it. Many clinical engineering programs find the expense for repair of these delicate devices to be quite high, and larger systems have shown that bringing any portion of the work in-house can lead to savings.

Downing would also like to obtain the same benefits in radiology by bringing the service and maintenance of advanced modalities, such as CT and MRI, in-house and is pursuing opportunities in the area aggressively. This objective contributed to Flowers completing the coursework covering a particular ultrasound system.

Downing is also not opposed to tackling the clinical laboratories as well but foresees such a transition occurring much further into the future—he concedes their inclusion may require expansion of the team to include another technician and notes that laboratories tend to operate differently. “We do maintain the smaller equipment in the laboratories, but the lab manager prefers to keep the contracts on the larger analyzers within the department,” Downing says.

If the endoscope program is any indication, bringing new items in-house can result in significant cost savings and increased customer satisfaction through improved uptime and faster response. User education helps, too. Clinical engineering often works with nursing education to ensure that clinical teams receive the appropriate training, both for new acquisitions and existing equipment. “Their team will develop educational modules whenever necessary, even if the item to be addressed involves simple operation,” Downing says.

Once again, teamwork is key to the successful completion of a project, and the clinical engineering department at Wilson Medical Center considers the entire facility to be potential team members. Cross training allows the biomedical equipment technicians to stay fluid and respond dynamically, but individual expertise ensures that between the five staffers, they can handle anything.

Downing states with pride, “These four guys make it work—I try not to dictate but step in when needed—and together, we are the little department that can.” 24×7 Cover Profile March 2013 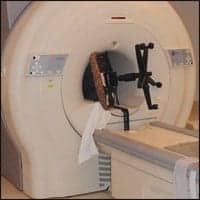