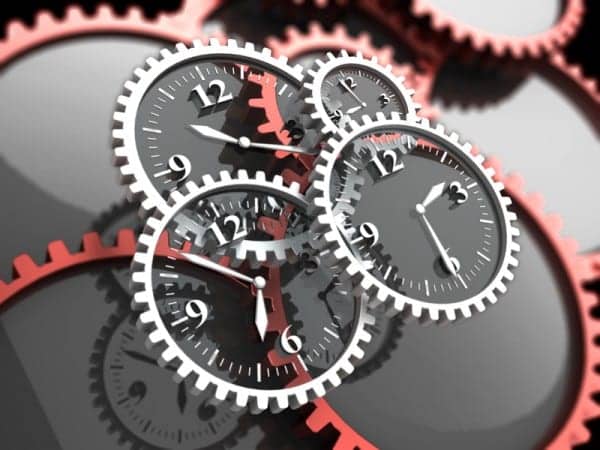 Biomedical test equipment manufacturers are constantly developing new tools of the trade. Here are some top technologies to watch

It’s one of the biggest challenges biomeds face: The relentless need for medical device testing—for ensuring that everything is working as intended in order to guarantee the highest standards of patient care. With that in mind, we reached out to three biomedical test product companies and asked them about their latest innovations and how they might help HTM teams do their jobs. Here’s what they told us: 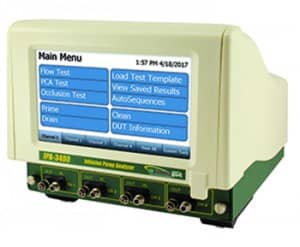 At St. Charles, Mo.-based BC Group, according to the company’s vice president of sales and marketing Ken O’Day, they’re “always working on new products and updates to our existing line.” The company recently announced a partnership with RTI Electronics to distribute their product line (including Cobia and Piranha).

They’re also now collaborating with a major (unnamed) equipment manufacturer to design a testing device that works specifically for that vendor’s equipment, and which can be used easily in the field. “This is going to be a very big deal,” O’Day says.

He can’t reveal details about the arrangement due to non-disclosure agreements, but he describes it as a variation on the ULT-2020, the company’s ultrasound leakage tester. A couple of years ago, he explains, the Intersocietal Accreditation Commission (IAC) issued standards and guidelines around transesophageal echocardiography (TEE) transducer testing prior to echocardiography procedures.

If the probe used in such a procedure is damaged, O’Day notes, it may cause serious injury or death if there is electrical leakage in the vicinity of the heart.

BC Group and other leakage-tester manufacturers provide a solution for this application, “but now one OEM wants to go a step beyond what’s currently offered, and they’ve asked us to work with them to develop what they need.” When the new testing product goes to market, O’Day says, he expects the OEM will “basically put it in their manual that, ‘You should be doing it this way from now on.’”

BC Group has an in-house engineering department, O’Day adds, “dedicated to nothing but developing products and software for our use.” The most recent product to come out of their shop is the IPA-3400 infusion pump analyzer, which the company describes in its literature as a “high-accuracy system that incorporates full touch screen control of all processes without the use of old fashioned buttons and knobs.”

Released last June, the device is built with up to four modular channel units—each of which can be pulled out independently and sent in for repair without affecting the other functional channels. The IPA-3400 also uses a new patent-pending technology to determine flow.

“The problem used to be that when a channel went out, the biomed wouldn’t want to send it in because they’d have nothing to work with. So they’d keep using it until another channel went out, and then they’d be down to two.” At that point, O’Day says, they’d basically flip a coin: “Should we use the two channels that we have, or should we send this thing in and be without it?” The IPA 3400 eliminates such issues, O’Day maintains. “At the very least, you always have three channels up and running. It means you don’t have to worry about falling behind.”

Sun Valley, Calif.-based test-equipment manufacturer Pronk was founded in 1998 “with a goal of making test equipment much smaller and easier for the healthcare community to use,” according to Greg Alkire, the company’s vice president of sales and marketing. Like most of his colleagues at the company, he says, he has an OEM background: Alkire and others came to Pronk from a medical device company that manufactured vital signs monitors. “We took all of that experience and knowledge and translated it into test equipment,” he says. 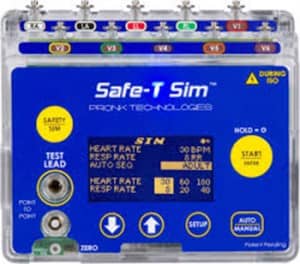 The Safe-T Sim, launched back in June, is the smallest automated electrical safety analyzer on the market, he says, and offers advanced portability. “In developing that analyzer, we took it to our customers countless times, got their feedback, and then brought it back to make changes to get it exactly right.”

Pronk engineers determined, for example, that any design they eventually came up with had to be customizable by the user. The unit can be configured to fit specific testing protocols, and performs test sequences automatically. The device also includes Bluetooth connectivity through a Safe-T Sim app that enables remote control and data capture.

“So all of your results can be captured electronically to automatically generate a test report for your CMMS,” Alkire explains. The product currently works with Apple products like iPhones and iPads, and will soon work with Windows and Android platforms, as well. (Another key feature of the device is its “drop-detection” technology:

“One of the biggest problems with electrical safety analyzers is they hit the floor and they’re no longer usable,” Alkire explains. Their technology includes a sensor that can sense the device falling and automatically shut down its electrical circuits to prevent damage.

“Our claim to fame,” Alkire notes, “has always been ‘one-button operation.’” Pronk’s SpO2 simulator has that kind of functionality, so company officials pushed for the same with the Safe-T Sim. “It was a lot harder for us to get there this time, but we did it eventually,” he recalls. “I’d say it took us six to eight months of extra back and forth before we were satisfied with it.”

One-button operability is key to efficiency, but it’s also important when it comes to consistent electrical safety testing, he says. “I used to go out and visit customers, talking about electrical safety, and I was surprised: If I [asked] biomed managers what testing they were doing, they’d say they do five specific tests, but as I would work with their technicians, there was inconsistency in their testing and none of them were actually doing all five of those specific tests.”

Automation can potentially minimize such scenarios. “Because if you can include automation and keep the testing easy, no one is going to try to do anything differently,” Alkire says. “All you have to do is hit one button, and all of your devices will be tested the same way.” 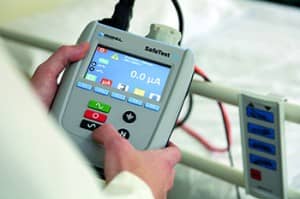 The biggest news at Tampa, Fla.-based Rigel Medical, which is part of the Seaward Group and is currently transitioning to Seaward Medical, involves its Uni-Therm electrosurgical analyzer, says Jack Barrett, the company’s national business development manager.

In addition, Barrett notes, the Uni-Therm now includes USB connectivity that makes downloading of test data (or uploading test programs) quick and easy. “This unit has become our flagship product within North America,” he says.

The other product Rigel brought to market in 2017 was the SafeTest 99 electrical safety analyzer. “It’s very similar to our SafeTest 50,” Barrett says, “but it has the additional capability of doing patient lead testing.” The device provides patient lead leakage testing in accordance with Health Care Facilities Code NFPA 99, he explains, and includes a  color-display interface.

Other important features, according to the product’s data sheet, are its “portable design,” its capacity for “fast step-though of test routines with minimized power cycling,” and technology that allows the user to manually control fault conditions.

Looking ahead, Barrett says, Rigel will continue to focus on improving automation with all of its electrical safety analyzers with the goal of simplifying healthcare technology management. “We’re always trying to make the biomed’s job easier—to increase their bandwidth and help them be more efficient.”

The leaders at all three of the testing companies we talked to—Pronk, BC Group, and Rigel—repeatedly stressed their commitment to innovation in an industry that literally depends on it for success. They understand the world of HTM, and they’re doubling down on their efforts to streamline and simplify the work of the modern biomed.

“[HTM professionals] are pulled in about 18 different directions every single day,” says BC Group’s Ken O’Day. “Whatever we can do to help them be more efficient, to speed things up, to improve accuracy…That’s always been and always will be our goal.” 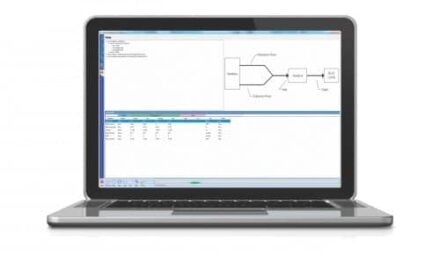