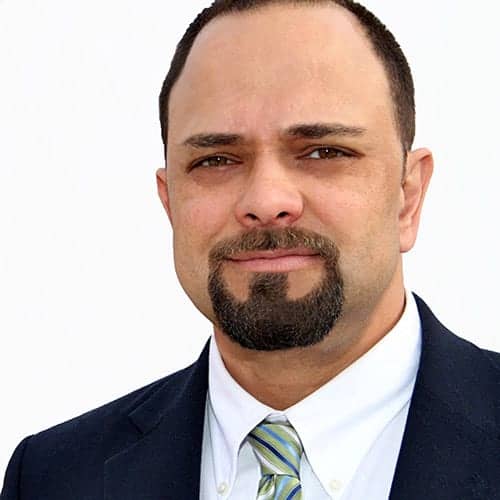 If you ask him, Ismael Cordero will tell you he is not out to save the world. Although his actions may not be overwhelmingly heroic in his eyes, both the health technology management profession and individuals living in developing countries are benefitting significantly from his educational and humanitarian efforts.

Cordero’s global efforts to improve the lives of others through health technology education were recently recognized by the Association for the Advancement of Medical Instrumentation (AAMI) Foundation and the American College of Clinical Engineering (ACCE). Those two organizations honored Cordero on May 31 by naming him the 2014 winner of the Robert L. Morris Humanitarian Award. The award was introduced in 2001 to honor individuals whose work has improved health conditions internationally.

After graduating from high school, Cordero was unsure of his future, but he knew he wanted to emulate his father, who was a mechanical engineer. “I entered a biomedical program, not really knowing what it was all about,” he says. “But during school, I didn’t quite get it. There was a lot of math, theory, and physics.”

In spite of these challenges, he stuck with his courses and earned a Bachelor of Science degree in biomedical engineering technology from Temple University in 1989. After graduation, he began working in a hospital, and that’s when the real meaning of the profession “clicked” for him. For the next 5 years, he held clinical engineering positions in a variety of hospitals, putting his education into practice.

Although he was gaining experience, Cordero felt he should be doing more. “My work life was predictable. It was the same thing day-to-day,” he reports. Thinking further education might help, he became a certified biomedical engineering technician in 1992. Then, 2 years later, still in search of more meaningful work, Cordero noticed an ad for a biomedical technician to work on an airplane for ORBIS International, a nonprofit organization dedicated to preventing blindness. It was a job opportunity that appealed both to his dedication to helping others and to his wanderlust. “I knew I wanted to see the world, so I interviewed for the job and they hired me,” he says.

Cordero fulfilled his penchant for travel with this position, visiting more than 40 far-flung destinations like Tunisia, Haiti, and other developing countries. At the same time, he utilized his clinical engineering education and know-how in managing medical technology for the ORBIS Flying Eye Hospital and for many of the organization’s clinical and surgical partners in countries around the world. ORBIS has many projects on the ground, he explains. “The organization helps hospitals build infrastructure, conducts training, and assists with the biomedical equipment component. These hospitals need good-functioning equipment.” According to the World Health Organization (WHO), half of the equipment donated to developing countries is not functional.

Aware of the dearth of training programs in developing countries, ORBIS, in collaboration with the ACCE, the Pan American Health Organization, and the WHO, organized several symposiums and workshops, one of which took place in Bangladesh in 2007. Cordero and several other individuals worked with the Bangladesh Ministry of Health and Family Welfare, the WHO, and the Commission for the Advancement of Healthcare Technology Management in Asia to coordinate the event.

Cordero, also a faculty member for the symposium, conducted a biomedical engineering technician workshop in which he shared his knowledge of the field. Other workshops focused on practical advice for the business aspects of health technology management. “We were looking at higher-level issues, such as how to organize the profession, what types of educational programs we need, how to bring people together, and how to form professional societies,” he notes.

Cordero explains that biomedical engineering in developing countries is a very small profession and is not well-defined. “Some people from other areas, like IT or those with an electronics degree, might land a job in a hospital fixing equipment. It’s harder to identify who is part of the profession,” he says, adding that some advances have been made in the last few years. “Now, people have biomedical degrees, and the larger hospitals are hiring people with degrees as managers. There have been more training programs and structure. But challenges still remain.”

Throughout the years he spent in developing countries, Cordero was struck by the tremendous gratitude of the people he worked with. “These technicians get little in the way of training. They see every opportunity as something big and important,” he says. “In several instances, they enjoyed the training so much, they named meeting or conference rooms after me. You remember that kind of appreciation.”

That same sense of appreciation extended outside the professional arena, according to Cordero. “People in these countries don’t have much to give, but they always invite you to their houses and they’ll bring you meals. I have lots of good memories of these trips.”

Cordero says that he was both surprised and honored by the decision of the AAMI Foundation and the ACCE to present him with the Robert L. Morris Humanitarian Award. It is especially meaningful for Cordero because he had met Morris years ago.

“I looked up to him as somebody worth following,” Cordero recalls. “Morris’ work helped develop the profession into what it is now. You could say he is one of the grandfathers of the clinical engineering profession. At the end of his career after he retired, he traveled and volunteered. Morris was the prototype international clinical engineering humanitarian.”

While volunteering benefits the recipient, those who offer the help ultimately experience advantages of their own, Cordero points out. “You are provided with a different viewpoint on things. Ultimately, it helps with the job at home. After volunteering, US techs are more appreciative of what they have. They are not bound to complain as much. It makes you realize what you have at home is not that bad,” he says.

For those seeking volunteer opportunities, Cordero suggests looking for organizations that donate equipment. “We realize it’s not sufficient to just give used equipment. In some ways, it makes a situation worse if you ship used equipment without manuals and extra parts. You need to build capacity for using and maintaining the devices.”

After a 17-year career with ORBIS, Cordero left the organization in 2013 and began working for Gradian Health Systems, New York. This nonprofit organization creates and sells anesthesia machines to select markets. “These devices are for developing countries where compressed oxygen is expensive and hard to obtain, and [where they] have issues with reliable electricity,” Cordero notes. “Our machine can operate without either of those.”

Cordero explains that Gradian was originally created by a foundation and then became a nonprofit company. “There is no pressure to sell a certain amount of devices, but rather to see that they are placed where they are needed,” Cordero says. The machines are sold worldwide, he adds, “from Haiti to Uganda to Nepal.”

Gradian offers a comprehensive package to those who purchase the machine, from maintaining and shipping the equipment to providing service support. “I install the machine, train the technicians, and provide after-sales support,” Cordero says. “I still get to travel quite a bit.” He joined the organization 3 or 4 years after the device was created, and is currently involved in establishing a sustainable global service model and making use and service improvements to future models.

In addition to his humanitarian work overseas, Cordero has been a strong advocate for transparency in medical equipment pricing in this country. Although he has not kept abreast of recent developments surrounding legislation (specifically, the Transparency in Medical Device Pricing Act of 2007, which never became law), he emphasizes the importance of openness to help manage the rising cost of healthcare. Cordero points out that secrecy among manufacturers when it comes to manuals, schematics, software, and other service information is driving up health care costs and burdening the system. “Manufacturers hold tight to the information. You never learn everything you need to know. Manufacturers want to keep control over the service area,” he reports.

Not only does Cordero promote the profession and attempt to enhance healthcare through personal action, but he also contributes via written word to a number of publications, including 24×7, Biomedical Instrumentation & Technology/AAMI News, Community Eye Health Journal (both the English and Spanish versions), Journal of Clinical Engineering, Arab Medico, and several manuals and guides.

Humanitarian work has been an integral part of Cordero’s life for more than 20 years. In fact, he views his humanitarian efforts as his chosen career path. “This is my work, where I fit in.” Rather than focus on his accomplishments, Cordero lauds those who work a clinical job and then use vacation time to volunteer overseas. “Those people are doing more than what I’m doing. They should be admired,” he points out.

“I have no illusions that I can change the world single-handedly. I’m pragmatic and like to put myself where I’m aligned and most useful. I like to be a part of something,” Cordero says. 24×7

Phyllis Hanlon is a frequent contributor to 24×7. For more information, contact jbethune@allied360.com.

Update: A quote from Ismael Cordero was corrected to reflect that Gradian anesthesia machines are sold worldwide.

Methodist Le Bonheur to Use McKesson PACS and CVIS