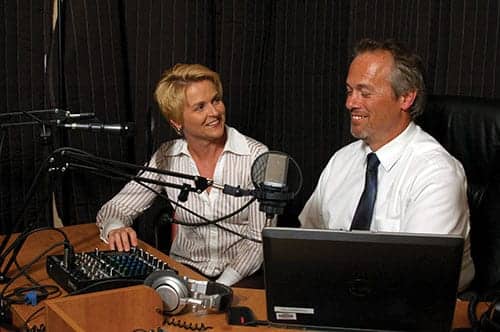 Despite the tech-heavy orientation of many podcasts, until recently, biomeds would have been hard-pressed to find a consistent, well-produced podcast that focused on healthcare technology. That changed this year with the debut of Healthcare Tech Talk, the brainchild of Terrence (Terry) Baker. The information systems manager for Indiana University Health, Baker had overseen both IS and clinical engineering teams for nearly a decade. When he went looking for a medtech podcast, he couldn’t find one that met his standards. So, with his 20-year sideline as a DJ and emcee, starting his own podcast was the logical next step.

After partnering with Kelley Hill, RN, MSN, a nurse with nearly 9 years of experience in emergency services and palliative care, Baker launched the first episode in February. Since then, they’ve produced new shows at a torrid pace, including six recorded live at the 2014 AAMI conference. At the end of June, the episode count stood at 19.

To find out more about their podcast (which can be found via healthcaretechtalk.net or iTunes), 24×7 talked with Baker and Hill in July.

24×7: How did each of you become so passionate about healthcare technology?

Baker: I’ve been working with and supporting technology one way or another for 23 years, starting with the Navy, where I worked on advanced electronics for 6 years. When I left the Navy in 1994, IT was the big thing, so I became an IT guy working in different industries. Then, in 2003, I had an opportunity to start working with Clarian Health Partners [now Indiana University Health] as a project manager in opening a new hospital.

As we got close to opening the hospital, all of a sudden I was getting barraged with IT-related requests coming from these biomed guys. That helped me learn how these two groups, IT and biomed, have a lot of overlap and touch points. That was 11 years ago. As you know, that overlap has only grown and grown the years since.

When I moved on to open a second hospital, Clarian North Medical Center, we started talking about the organizational structure and what it would look like there. In a meeting, I said, “Hey, it would be really neat if the biomedical team and the IT team were one group at the hospital. Subsequently, I applied to be an IS manager. When I got the position, lo and behold, the biomed team was on my org chart. That was 9 years ago.

Since then, over those 9 years, my knowledge of clinical engineering has just grown and grown. I’ve really enjoyed bringing the two worlds together.

Hill: I got into healthcare, and nursing, about 9 years ago now. After I got my first semester of clinicals under my belt, I went to a major hospital organization here in Indianapolis and applied for a student nurse extern position in the ER. I’ve been in the ER predominantly ever since. In the last 3 to 5 years, informatics became a big part of my workflow, my work process as a manager. I wanted to learn more about technology and be able to communicate intelligently with the IT department and the biomed team.

24×7: What inspired you to produce Healthcare Tech Talk?

Baker: One of my buddies was into podcasts, and I started thinking, “Wow, wouldn’t it be great to use my downtime when I’m driving home every day to listen to something educational about my industry?” But what I found on healthcare technology was minimal. So I decided to create my own podcast, because I had the means and the technology and the desire to do it.

When I first decided I was going to do this podcast, I contacted a biomed friend of mine to cohost the podcast. But he lives a couple of time zones away, and we just couldn’t make it work.

The initial idea behind the podcast was to have a couple of geeks sitting around, talking about technology. But then I thought about Kelley and her background, not just as a nurse, but in theater and radio. I decided that we could come at technology not just from the point of view of the technical guy alone, but also from her perspective as the voice of the customer. I am so thankful for that decision and that I was able to talk Kelley into this, because people love it.

Hill: For me, joining this podcast was as much about professional development as it was about bringing that clinical perspective to technology; that’s what I was interested in doing. I think that clinicians, IT, and biomed have wildly inaccurate perceptions of one another. To be honest, I told Terry before we started this podcast that, to me, the IT and biomed staff are just people who come in and fix my stuff and disappear. Our perceptions of one another are just so “off.” So I wanted to help bring those different types of people together.

24×7: What are you trying to achieve with this podcast, and who is your target audience?

Baker: This is an interview show, so although Kelley and I share our experiences and insights, the episodes are not about us telling our listeners what we know. Instead, it’s usually us bringing in a guest who’s an expert in a field. Then I ask questions based on my technical experience and perspective, while Kelley asks her questions from a clinical viewpoint.

Typically, our podcasts are introducing people to a concept. We want them to understand the concept, which sometimes can get lost just reading about it on paper. We just want to get people’s thoughts going.

Our audience is broad, we think. It certainly includes HTM professionals. Some of our most-listened-to episodes tend to be the biomedical ones. Then we have healthcare IT people and students listening as well.

Hill: We have a lot of practitioners and providers that listen as well. For them, this is truly new information.

Baker: Right now, we’re in what you might call the “soft-open” phase. We use social networking, Twitter, Facebook, LinkedIn, and word of mouth to promote the show, but we haven’t gotten real aggressive with it yet. At this point, this is a 100% passion project.

Hill: It’s kind of difficult to answer that question simply because, in all honesty, I don’t think we realized it would go this far this fast. Right now, it’s difficult to say where we see ourselves in a year or in
5 years. Until we went to the AAMI conference in June, we didn’t realize how much people enjoyed what we were doing. We knew that we were doing a good thing, that we were having fun doing it, and we were putting something good out into the world. But until June, we had no idea how well it was being received. 24×7

John Bethune is editorial director of 24×7 magazine. Contact him at jbethune@allied360.com.