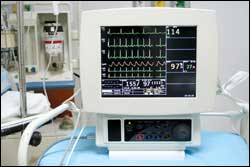 A recent blast going around the Internet made a statement that hit home. It said that 50% of what you learn in a year will be obsolete within 3 years. Another part of the message said that we have to prepare ourselves to solve problems that we do not know exist with technology that also does not exist. In the medical field, we have an advantage over other fields in that regulations slow down the introduction of new technology and techniques. It is not just the FDA, but also all the insurance companies and other organizations that pay for health care along with hospitals, many of which will have to be dragged, kicking and screaming, into the 21st century.

The simple electrocardiogram—ECG or EKG, if you prefer the German pronunciation—recording is basically unchanged from 1903 when it was first demonstrated by Willem Einthoven, a Dutch scientist who received the Nobel Prize in 1924 for his discovery of the mechanism of the ECG. But what has been added since to the recorder or monitor is a vast array of diagnostic software that provides physicians with instant diagnosis of rhythms, conduction times, and the electrical status of the heart. Many physicians no longer over-read the recordings, but rely totally on the machine interpretations.

While we, as a profession, do not need an in-depth understanding of cell biology relating to the heart, we do need to understand the basic process of electrical events on and in the cells. In a normal cell at rest or polarized, the inside of the cell is negatively charged in comparison to the outside, which has a positive charge. The permeability of the cell wall changes—allowing sodium and potassium into the cell through fast response channels, and calcium through slow response channels—making the inside of the cell positive in respect to the outside of the cell. This process is called depolarization, and it begins at one end of the heart and moves in a radical fashion throughout the heart. At some point, the calcium reaches a level that converts the cell back to having the negative charge on the inside and a positive charge on the outside—called repolarization. The electrical potentials created by the depolarizations and repolarizations of the cells compose the ECG complex.

In a normal cardiac rhythm, the impulse starts at the sinoatrial (SA) node, located on the endocardial surface of the right atrium near where the superior vena cava joins the heart. This is the main pacemaker for the heart, and it is connected to both the right and left atriums via the Bachmann bundle. The impulse also travels through the three internodal tracts to the artrioventricular (AV) node. When the atriums contract, started by the depolarizations of the cells, the P wave is generated, which is the first part of the ECG complex.

When the impulse arrives at the AV node, there is a delay of 0.05 to 0.09 seconds (note that these numbers can greatly vary with the condition of the patient and are given as a guide, not gospel), before the impulse is passed on to the bundle of His. The delay serves several purposes, including buffering the heart from atrial arrhythmias, allowing extra time for the ventricles to fill, and slowing down the heart rate. If the SA node fails, the AV node will take over as the main pacemaker of the heart, but the rate will be slower.

The bundle branches end in the Purkinje fibers that cover the endocardial surfaces for both ventricles. This stimulus to the ventricles is shown in the P-R interval. The ventricles generally depolarize in two phases: first across the interventricular septum from left to right, which is the Q wave; and second through the activation of both ventricles from the endo to epicardium and is recorded as the RS wave. Atrial repolarization also occurs during this time period but is obscured by the QRS signals. The pause between depolarization and repolarization is the ST segment. This ST segment is where many problems with the heart are first noted. A slow return to the baseline, called a depressed ST, indicates that damage to the heart may have occurred in the past.

The repolarization of the ventricles is indicated by the T wave, generally positive in defections and about 50% of the height of the R wave—again, this is a guideline, not a gospel number. In some patients, the T wave will be negative. In some patients, there is a U wave that follows the T wave, and I have yet to find a good explanation for what it is and why everyone does not have it. If you know, please share the information with our readers.

There are a multitude of good publications showing various waveforms with arrhythmias and other FLBs (funny looking beats) that are difficult to explain. I can share those with you if you need them.

A point to remember on the ECG waveform is that it is time based, and with a chart speed of 25 mm/sec each millimeter is 0.08 seconds. If you are having problems with a monitor double-counting the heart rate, the problem lies with the design of the device, in that the company uses a level detector for detecting heart rates. This monitor also probably will count pacer spikes. You have to turn down the gain of the amplifier so the detector is not counting the P or T wave but just the R wave.

David Harrington, PhD, is director of staff development and training at Technology in Medicine (TiM), Holliston, Mass, and is a member of 24×7‘s editorial advisory board. For more information, contact .

Alternative Impacts from the CMS Directive