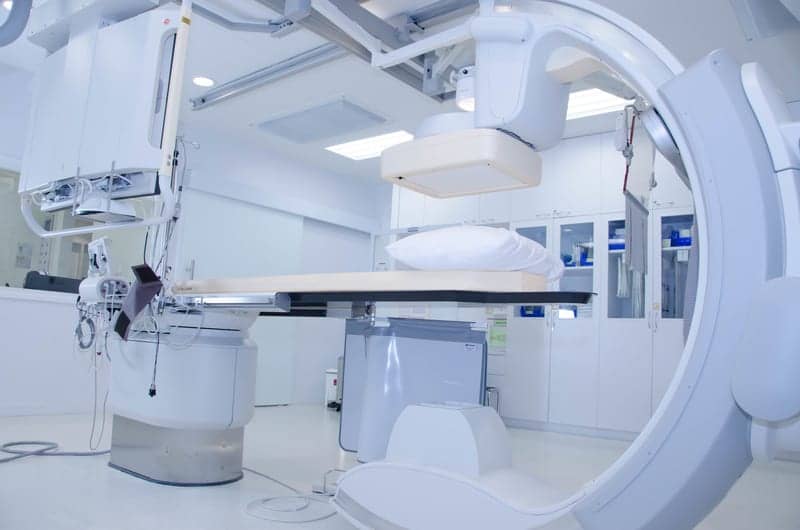 Nowadays, hybrid ORs are equipped with diagnostic imaging technology to give physicians visual access to chambers and arteries of the heart. In these areas, physicians perform life-saving procedures, including coronary artery bypass graft surgery, balloon angioplasty, congenital heart defect closure, stenotic heart valves, and pacemaker implantations. But these acute procedures would not have been practicable without the appropriate technology to facilitate the imaging process.

Specifically, cath lab operations are dependent on medical displays, as these monitors allow physicians to visualize a patient internally and perform necessary procedures. In fact, in a single medical procedure, up to four to six monitors can be utilized at any time for enhanced visibility.

Although many monumental advancements have been made in the efficiency of cath labs, the dependence on x-rays for imaging has persisted through every upgrade. From purchasing analog or digital modalities to choosing a single or bi-plane system, there are endless customization possibilities. Typically, cath labs consist of an image intensifier, a C-arm, x-ray tubes, and several displays.

Advantageously, the digital age ushered in an era of improvements to imaging technologies, such as lower radiation dose and enhanced visual clarity. And in cath labs, the adoption of cathode-ray tube (CRT) monitors inherently changed how the rooms ran.

In the early cath labs, all information was conveyed through film. The x-rays utilized produced high doses of radiation and low-quality images, which were subsequently printed on 16-mm or 35-mm film. Radiologists would then have to spend countless hours holed up in darkrooms to process the images while wasting ample space storing boxes of film.

Enter picture archiving and communication systems, or PACS. With this all-in-one technology—PACS provide electronic storage, retrieval, distribution, and presentation of radiology images—the transition from analog to digital technology was concretized.

Following CRT displays was the adaptation of LCD monitors—something physicians endorsed since they are slimmer, more portable, and offer higher-resolution images than their predecessors. Moreover, in the cath lab, there were typically four to six CRT or LCDs in use, since one image was always utilized to monitor physiological attributes, such as a patient’s heart rate or blood oxygen level.

But Michael Thomas, director of business development and marketing at Irvine, Calif.-based Ampronix, says another technological trend has emerged.

“We are witnessing yet another transition in the cath lab: hybrid OR monitors, as many physicians are upgrading from [cold cathode fluorescent lamp] HD displays to ultra-high-definition 4K/8MP technology.” In fact, many healthcare facilities have upgraded or are currently upgrading their medical displays to this resolution, Thomas says, since it offers physicians a previously unknown level of visibility. And during critical surgeries and procedures, such clarity can mean the difference between saving or losing a life.

The 4K/8MP medical-grade displays Thomas mentions are now considered the “gold standard” for surgical applications, allowing multiple screens to be viewed on a single monitor while taking up a minimal amount of space. And when a 4K/8MP display is combined with a video manager, it can become customizable with a variety of layout options and editing tools, such as magnification. Many healthcare providers tout this design as easier to use, calling its adoption an easy choice since it facilitates precise procedures and minimally invasive surgeries.

That’s not to say that challenges don’t exist. Although the advancement of this technology has improved patient care, the transition could prove to be detrimental and may demand considerable attention, industry insiders caution. Since cath labs previously housed four to six displays, there were preventative measures in place to guarantee a backup option should a monitor burn out.

After all, in critical imaging procedures like angioplasty, mere seconds without visibility can be devastating—and a single display makes cath labs extremely susceptible to all the risks associated. To solve this issue, some displays are equipped with a secondary backup monitor that folds out, if needed.

However, this is a sacrifice that presents limited visual acuity, many healthcare providers acknowledge. When this situation unravels, the entire procedure must be halted and the patient sutured up, as technicians attempt to remedy the problem.

Furthermore, any display failure amounts to an entire cath lab being rendered obsolete until a replacement or repair solution is provided. Unfortunately, the turnaround time for either of those protocols can take over a week.

So, what can healthcare facilities do? Michael Thomas says Ampronix offers one option. The company sells, services, and repairs legacy and current cath lab, EP lab, and hybrid OR monitors, Thomas says, and performs preventative maintenance, as well as LCD, backlight, reflector, and power supply replacement.

“We ensure zero downtime if service or replacement is required,” he adds. “Our warehouse has a readily available response team of ESD- and American Society for Quality-certified technicians to assist and answer questions for urgent repairs.”

What’s more, Thomas says, “Nationwide requests received by 2 p.m. PST receive same-day or next-day delivery. And any medical technology questions and concerns are answered by knowledgeable customer service representatives.” Suffice it to say that in the busy OR environment—where keeping surgical monitors up and running is critical to patient care—it’s good to have options.