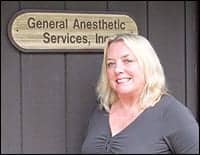 Growing from humble beginnings and just two employees, General Anesthetic Services Worldwide (GAS), South Park, Pa, has now serviced devices for more than 10,000 facilities around the globe. Founded in the United Kingdom in 1989, the company, which bills itself as the world’s largest independent anesthetic vaporizer service provider, is currently focused on increasing awareness among biomeds and health care professionals about the benefits of vaporizer service and maintenance. 24×7 recently spoke with Lynne Fisher, sales and marketing director, about training, the dangers of unmaintained vaporizers, and giving back.

24×7: What are anesthetic vaporizers, and what types do you service?

Fisher: The FDA’s identification for an anesthetic vaporizer is a device used to vaporize liquid anesthetic and deliver it in a controlled amount to patients. I have a picture of the first anesthetic vaporizer being invented by Cyprane in the UK, which I take to biomed meetings. However, it did not come on the market until 1956. GAS services all variable bypass vaporizers manufactured in the United States and Europe.

24×7: Do facilities usually take good care of their vaporizers?

Fisher: A lot of smaller companies have contracts to do the preventive maintenance (PM) on the anesthesia machines, so they go in and check the machine and see if maybe it needs a couple parts and do what’s called an efficacy test, which is usually done with a gas analyzer. What this does is it usually tells you whether the vaporizer is leaking and whether the tolerances are in the middle stream, meaning they’re not too high or too low. But all this doesn’t really mean anything if the vaporizer has not been maintained, because there are two types of maintenance—there’s preventive and there’s corrective. We go by the OEM’s recommendations in most cases. There are exceptions.

24×7: What can happen to vaporizers if they are not properly serviced?

Fisher: Internally, these devices have components that deteriorate over time, such as cotton wicks, rubber gykos, and different Teflon O-rings. Around the control valve there’s a rubber gasket that can get anesthetic agent on it, which can swell and contract, and eventually crack and cause vapor leakage into the OR environment, which is extremely dangerous.

What we’re trying to do now is to educate the biomeds, clinical engineers, and anesthesia techs—as that’s who we primarily deal with—as to why they should have the vaporizers maintained. If you look at them from the outside, they may look fine, but when you open them up, you might see corrosion. With veterinary used vaporizers, we’ve even opened them up to find pieces of teeth or blood. On our Web site we have pictures of contamination of actual vaporizers we’ve opened up.

When I go to the state biomedical meetings now, I’ve been taking internal components that have corrosion or mold on them, just so that biomeds can see what can happen internally.

24×7: When the devices come in for repair, are the problems usually major?

Fisher: No. The problems we see are usually pretty minor. Let’s say we have a vaporizer out there and the facility says it’s reading low. We’ll automatically exchange or replace everything by 10:30 am the next business day without any questions, but usually if it’s reading low, then it means that there isn’t enough anesthetic agent in the vaporizer, or they’ll say that it’s leaking and maybe they don’t have a lever closed.

We fortunately haven’t ever had any incidents, but even if you maintain the vaporizers, it can be just the simplest little things. For example, if you don’t have the vaporizer placed on the mounting bracket with the O-rings in the proper position, then all the readings will be off on the vaporizer. It will read that something’s wrong, even though something isn’t. The vaporizer readings can be off simply from a misplaced O-ring.

24×7: Is working on vaporizers by in-house hospital personnel dangerous?

Fisher: Absolutely. You cannot service a vaporizer in-house. First of all, to get into the vaporizer you’d have to take off the top label, and then you’d have to unscrew it from the top to get it apart. Also, all the tools are in metrics.

You cannot service an anesthetic vaporizer at a hospital or surgery center. You can efficacy test them with the gas analyzer, but again that doesn’t really mean anything if they haven’t been serviced in years.

There’s a special lubricant between the control valves and the rotary valves and if that dries up, the dial can lock, meaning the patient can wake up during surgery or you can give them too much anesthetic agent.

I have marketing people calling around to facilities who say, “We do this ourselves.” That’s one of our biggest battles. You can’t do it yourself.

24×7: What is your service procedure?

Fisher: The first thing we do after we get a vaporizer in is we drain it. Then we dry it out, which takes a long time. We take it apart, we change every internal component, put new lubricants in, test the vaporizer, retest it again, and then we use a laser refractometer to calibrate it.

After we service them we put our label on them and little tamper seals. If those are removed then that voids the warranty. They’re pretty basic. Most biomeds and all anesthesiologists know how to operate them. GAS uses trained certified engineers to efficacy test and install vaporizers in hospitals and surgery centers.

24×7: Are there any special skills required for working on these devices?

Fisher: Well, you can’t just take someone off the street, show them, and have them pick it up in an hour. It’s a highly regulated field, and we have huge service manuals. Everyone working at our facility has gotten certified and has been trained at our facility in the UK. First of all, you have to like doing this sort of thing—which mainly involves taking things apart.

24×7: Tell us about your vaporizer service exchange program.

Fisher: If a hospital calls us, and let’s say they have a Tec 5 isoflurane key field vaporizer, we will get the model, the agent, and the type of filler from them. Then we get a purchase order and we send like for like. We’ll send them a vaporizer that’s already been serviced, calibrated, has the calibration sheet, and then we’ll put a return label in there. When the hospital gets it they can put it in and send theirs back to us and we bill them. Our warranty is 3 years, and we provide warranty replacement by the next business day.

24×7: Have you ever experimented with manufacturing vaporizers?

Fisher: We do manufacture vaporizers in the UK. We manufacture the RM 3 for the veterinary market and also the GAV. We have vaporizer accessories manufactured in California.

24×7: Have there been any recent technology changes to vaporizers?

Fisher: No, not with the vaporizers. There are different brands from different companies, and now there are many vaporizers being manufactured in Asia. However, they are the same concept. The only one that’s different is the ADU, which is a totally different concept.

Fisher: We have a handheld gas analyzer coming out in the UK, and we’re also starting to get into the animal research labs. We’ve designed a new vaporizer for animal labs that has a larger liquid capacity than the current ones.

24×7: How do you interact with your industry’s overall community?

Fisher: We don’t really deal directly with the anesthesiologists, but we do deal with the clinical engineers, the people that maintain the equipment and work in the OR. We support state biomedical societies’ meetings and AAMI.

We also give to Mercy Ships charity, Children of the Nation, and other missionaries that go to Africa and Central America. We just gave seven vaporizers to Mercy Ships. I think it’s really important to give to these organizations.