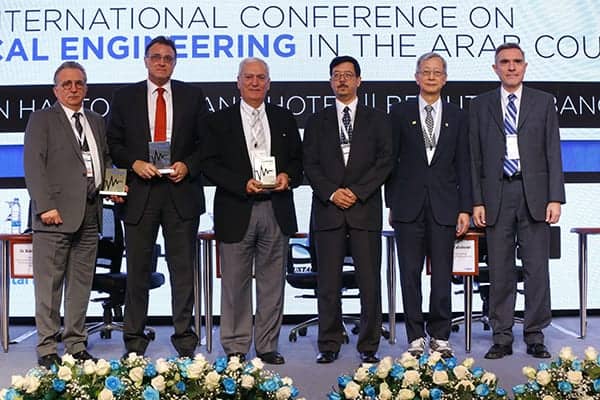 An unassuming hero, Wang seeks to encourage the next generation

Caption: Binseng Wang (second from right) meets with colleagues at the International Conference on Biomedical & Clinical Engineering in the Arab Countries.

Despite the number of accolades following his name, Binseng Wang, ScD, CCE, fAIMBE, fACCE, doesn’t consider himself an industry hero. In fact, he’s downright uncomfortable with the thought. But when you get to know a little about Wang, of Cornelius, N.C., you realize why he deserves the title he is so quick to shy away from.

Holding a doctoral degree in bioelectrical engineering from the Massachusetts Institute of Technology, Wang has over 30 years of experience in healthcare technology management on both a local and international level. He’s held key positions at leading organizations—such as MEDIQ/PRN, Aramark, and the National Institutes of Health—and has served as a professor of biomedical engineering at the Milwaukee School of Engineering and State University of Campinas, Brazil. Over the course of his career, Wang has specialized in the areas of quality and regulatory compliance; research, design, and development of medical devices; and pharmaceutical licensing and distribution.

He is also a prolific author, having penned a total of three complete books, with topics spanning medical device maintenance to clinical engineering financial management and benchmarking, in addition to authoring several chapters in other books. His resume is both extensive and impressive, but Wang himself is dismissive of the many accomplishments and credentials that trail his name. “You can have 10,000 titles, but if you don’t do anything for someone else, it’s worth nothing,” he points out.

A deep thinker, no doubt, but Wang is also incredibly down to earth and relatable, those who know him say. His humbleness may be traced back to his upbringing, having been brought up as a war refugee after his family left the violence of the Chinese Civil War and settled in Brazil, where he grew up and attended school.

During his childhood, Wang’s aspirations for his future were a bit different than they are today. He fondly remembers his father asking him when he was about 10 years old what he wanted to do when he grew up—and he responded that his dreams included driving “that big yellow car,” or taxi. “Seeing someone drive a big car, I was quite envious,” Wang recalls with a laugh. “I didn’t know what a ‘taxi’ meant.”

Taxi-driving dreams aside, Wang went on to earn his degrees by attending college and master’s programs in Brazil, and a doctorate program in the United States, then heading back to Brazil to pay off his student debt, a nine-year minimum requirement. “It was good to do something for the country that paid my studies at MIT,” Wang says of his service time.

With an early interest in physics, Wang also chose to major in engineering because he felt like he needed a “more practical” degree to secure employment. He notes that he didn’t have any intentions of entering the biomedical field until he took an elective course in medical physics. “I didn’t know that physics and engineering could help people,” he says. “That showed me a different path that I could take using my knowledge.”

For Wang, avoiding areas of physics that dealt in weaponry and focusing instead on health technology that could help others was important to him. “Coming from a family of war refugees, I wanted less money and recognition and the ability to do something good for the people,” he adds.

Both personally and professionally, Wang is a mixture of contradictions: accomplished yet unassuming; skilled yet eager to learn; an objective scientist yet empathetic. And part of the reason Wang so masterfully navigates his career on so many different playing fields can be linked back to one of the most formative experiences of his education, while pursuing his master’s degree in biomedical engineering.

Upon admission, family circumstances with his supervisor and the fact that he was the only student in the program led him to be transferred to the head of neurosurgery, who, unfamiliar with biomedical engineering, simply treated Wang like a medical intern. And true to form, Wang turned what was a less-than-ideal situation into a positive one. Looking back, he calls his time as an unofficial medical intern “one of the best experiences” he could have hoped for, as it acquainted him—hands-on—with the clinical environment. And that’s something that is often lacking in the medical device sector, Wang maintains.

He points out that many times, those designing biomedical equipment aren’t always adept at knowing exactly how a piece of equipment will be used or what challenges will be encountered in the clinical environment—so his “intern” days of working in the surgical suite helped him gain that vital perspective to guide his work. Wang hopes that, in the future, more device manufacturers will be able to bridge the gap between design and function for optimized usability. “It’s a disconnect that needs to be fixed,” he adds.

‘Jack of All Trades’

Thanks to his expansive experience and never-ending curiosity, Wang has dubbed himself a “jack of all trades, master of none,” describing his favorite part of his career as the ability to learn from all different aspects of healthcare technology. “[Looking at] the entire life cycle, starting from the design and manufacturing to producing, supporting, and managing [the technology], unless you step into each [process], it’s very difficult to see the challenges, mistakes, and the way that other people look at [everything],” he says.

And while he may be a jack of all trades, Wang considers his primary role as imparting what he has learned to the next generation. Unlike those who may view their own expertise as the end-all, Wang welcomes the opportunity for younger generations to question his own work and way of approaching the industry. “If we are going to do the same things over and over, there’s no evolution or improvement,” he says. “We really need to question every step of the way we are doing this. That’s how our species will improve, progress, and thrive.”

“I’m a little bit of a rebel,” he adds with a laugh. Still, many would argue that this “rebellious” nature has led to Wang’s personal and professional successes—and he would likely agree. After all, Wang says, he has always been a proponent of questioning industry practices, rather than accepting the status quo, as a means to improve the delivery of patient care. “That’s why I always focus on the outcome,” he says. “To think why you are doing something and think of why you’re not doing something better.”

For Wang, a large part of the questioning process is acknowledging and admitting mistakes—and taking the time to learn from them. “It’s extremely important to learn from our mistakes and ultimately benefit the patients,” he says. “That’s the main reason I write so much so I can pass my mistakes and lessons onto others.”

While Wang adds to his authorship repertoire with his next book on evidence-based maintenance—which he anticipates will be released by the end of the year—he is taking a bit of a break from his favorite hobbies of fishing and home improvement and focusing on his professional and volunteer work. And, in the end, no matter what you call him—“Jack of All Trades,” “Rebellious Scholar,” or “HTM Hero”—Wang will continue to do what he does best: work hard with humility.

“I’m just a person trying to do his best to help the profession of people trying to improve the use of technology in patient care,” he says. “I’m just one little piece in this big puzzle.”

Chaunie Brusie is associate editor of 24×7 Magazine. Questions and comments can be directed to cbrusie@24x7mag.com. 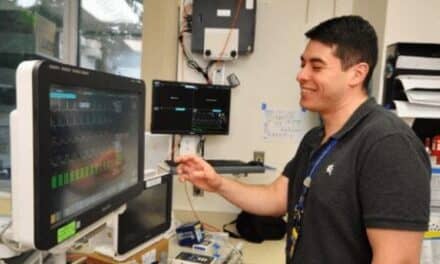 A Day in the Life: VA Portland Health Care System 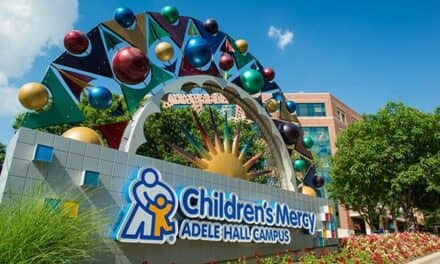 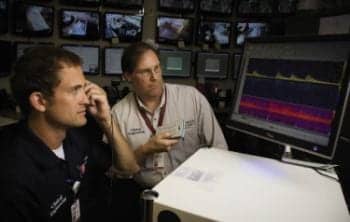 A Day in the Life: Factory Serviced