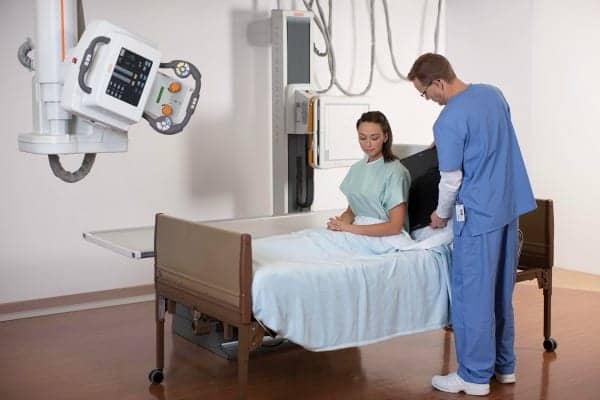 As part of an expansion that saw the doubling of its emergency department, Ind.-based Columbus Regional Health has installed a Carestream DRX-Evolution Plus system. The new imaging system has a wall stand on a rail with a fixed detector while a wireless DRX Plus 3543 detector is used in the table and for tabletop exams.

“The moveable wall stand with a Bucky-angulation feature expedites cross-table and other complex exams and reduces the need to move patients who are seriously ill or injured,” says Bill Algee, the hospital’s radiology manager. “This system’s design and ease of use allow our technologists to efficiently capture imaging studies that can equip physicians to deliver responsive diagnosis and treatment.”

What’s more, the new DRX-Evolution Plus also offers an auto-tracking feature that moves the x-ray tube into position to help reduce fatigue and repetitive stress injuries for technologists. “A remote control lines up the x-ray tube to either Bucky to further streamline the imaging process,” Algee adds.

The department also purchased a small-format Carestream DRX 2530C detector, which helps enhance quality and reduce dose for extremity and pediatric exams, as well as images captured in the operating suites. “Being able to use any DRX detector in any DRX system is a tremendous advantage and we appreciate the flexibility and redundancy it provides,” Algee says.

For more information about this system, visit Carestream.