Biomeds to Descend on Disney World for 2018 FBS Symposium 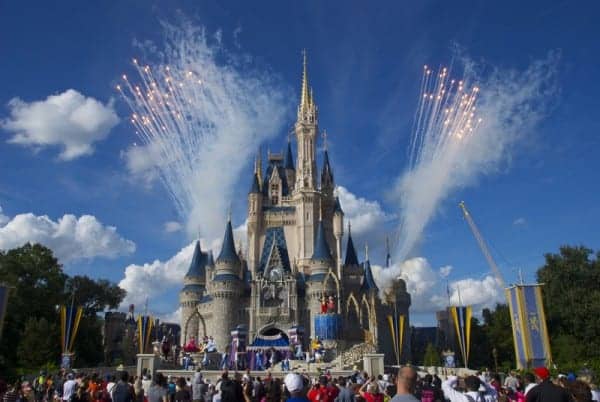 Returning to the Disney Yacht Club Resort, this year’s Florida Biomedical Society symposium will feature an enhanced educational lineup and give biomeds the opportunity to take the CBET test.

If you haven’t done so already, mark your calendars for this year’s Florida Biomedical Society (FBS) annual symposium, which promises to offer an enhanced educational slate of more than two dozen educational classes—several with OEM certification—and the opportunity to take the CBET test. Returning for the first time since 2016 to the Disney Yacht Club Resort in Orlando, Fla., the symposium will take place from December 6-9. And conference organizers promise it will be one for the books.

In addition to a strong educational lineup, the three-day event will offer numerous opportunities for networking and casual fun, FBS officials say. While it’s not required to pre-register for the symposium—walk up registration will be available—FBS Symposium Director Bill Hascup, BMET III at TriMedx, highly recommends it because pre-registered attendees will be better able to choose the educational offerings that are most relevant to their working lives. Plus, some classes have attendance limits.

Those from outside of Florida won’t be kept out of the fun, however. The FBS is open to anyone who wants to attend—not simply biomeds working in the Sunshine State.

The FBS has been holding its annual symposium for more than a quarter-century, and it’s expected that between 550 and 600 biomeds will attend this year’s event at the Disney Yacht Club. The Disney family of resorts has been a popular and successful venue for FBS—previously it has hosted events at the Grand Floridian, Boardwalk Inn, and Coronado Springs, FBS officials reveal.

The core of the symposium is its educational offerings for HTM professionals. This year’s symposium will feature more than 25 educational classes, ranging from resume writing to equipment repair to management best practices to review classes for the CBET exam—which will be held on the last day of the symposium.

FBS Educational Coordinator Jim Bowles, who is also field operations excellence director at TriMedx, notes there is likely a class that will fit the needs of any attendee. “FBS has a full schedule of classes for each of the modalities: biomedical, radiological, laboratory, information technology, and management,” he says. 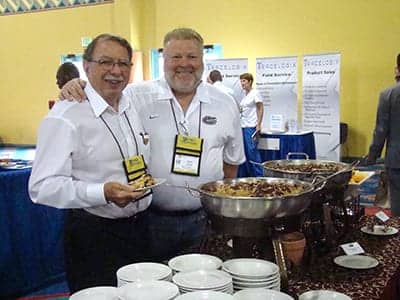 Bowles notes that there are two classes that he and the organizers are particularly enthusiastic about. “We are excited to have two classes from Verathon and Bovie that will provide attendees with a manufacturer certificate,” he says, adding that having vendor involvement in the educational classes helps with the success of the symposium. “All of our vendor partners provide the education at the FBS Symposium as volunteers. This is a huge commitment from our vendors, which makes it affordable to attend. Without our vendor support, the FBS Symposium wouldn’t be the success that it is.”

Ultimately, the goal for all of the educational sessions is for the attendees to return to their workplaces with valuable new skills that translates into customer satisfaction and cost reductions for their organizations, according to Bowles. 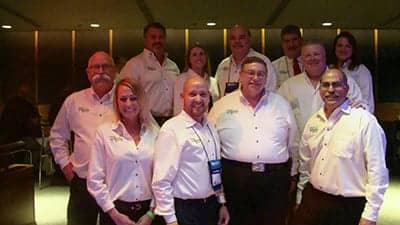 The FBS board of directors at a pervious Epcot reception

While education is at the center of the symposium, attendees can expect to have a little fun as well. Hascup notes there are several networking opportunities available during the course of the symposium, including a vendor reception at the Lakeside Marina—which is open to all attendees, a disco party, and a concluding night reception at Disney’s Epcot.

Note: The disco and Epcot events require attendees to pre-register. (As of this writing, the Epcot reception is fully booked, but Hascup says that those wanting to attend can sign up on a wait list in case there are cancellations.)

One of the highlights of this year’s symposium is the opportunity for biomed attendees to prepare for and take the Certified Biomedical Equipment Technician (CBET) test. FBS is partnering with AAMI/AAMI Credentials Institute (ACI) to offer the exam, and is offering several incentives to those who sign up to take it and for those who pass the test, which will be administered by ACI on December 9—the last day of this year’s symposium.

FBS will reimburse $100 of the exam fee for the first 10 applicants who sign up before the November 21 application deadline. And it will also reimburse $100 for the first 15 attendees who pass the test (proof of passing is required). Prior to the December 9 test, there will be two prep sessions on December 8, starting at 11 a.m. Lou Katchis, BSEE, MSEE, CCE MBA, will lead the classes.

According to the AAMI website, certification demonstrates that the biomed has the knowledge to ensure a safe and reliable healthcare environment. It’s also a way to demonstrate commitment to one’s career and overall competence. Echoing AAMI, FBS Secretary Frederick McMurtrie, CBET, who is also a manager at South Florida-based Broward Health, hopes that many of the attendees take advantage of this opportunity because of the personal and professional benefits it can bring them.

“Partnering with AAMI/ACI to host the exam in our state will encourage our attendees to add this personal credential and value to their place of work. CBET certification, like other healthcare credentials, is a means by which one can be measured to a certain professional standard—and passing the exam should be seen as a milestone in one’s career,” he says. “We hope that the convenience of taking the test at the symposium, along with a CBET review class the day before the test, will appeal to our membership and they will feel empowered and supported.”

After all, McMurtrie adds, many of the FBS board members have taken—and passed—the CBET exam “and we wish to inspire the next level of leadership in our state by being a good example for the new professionals filling our ranks.”

The application to take the test can be downloaded on the FBS website.

Not only does the symposium provide opportunities to learn and network, but it enables attendees to give back as well. For Hascup, this giving back is one of the biggest highlights of the symposium. “I’m most excited about our Thursday night fundraiser at Orlando’s Topgolf,” he says. “Each year, we put on an event to support Tyler’s Hope to help find a cure for dystonia. It’s a great start to our symposium.”

The recent devastation caused by Hurricane Michael to the Florida Panhandle in early October is also weighing on the FBS Symposium’s organizers, who are discussing options to help those affected—particularly the biomeds in the hospitals that were damaged by the Category 4 storm.

“Hurricane Michael affected many of our hospitals in the Panhandle and also some of my co-workers, so this one has a personal note to it,” says McMurtrie. “Being that the storm just went through the area, we’ve just begun our planning to help out where we can. The FBS board meets again soon, so this is something that is on our agenda. In the past, FBS has rallied our leadership to help out by making donations—and leading by example, we also try to rally vendors to do what they can to help. In addition, we always encourage our membership to help with time or money to those in need after an event.”

With all of the educational and networking events to choose from, it can be overwhelming for newcomers and veteran symposium-goers alike to make a plan to get the most out of the FBS Symposium.

Hascup has advice for both first-time attendees and those who may have come to one or more past events. For first-time conference-goers, he recommends: “Attend all the social events, which are great networking opportunities with your fellow attendees and exhibitors.” After all, he says, “FBS tries to provide opportunities for fellowship and a less formal way to get to know your fellow HTM professionals and the OEMs and vendors that provide valued service to our community.”

For those who have attended a few times and want to make sure they’re still getting the full value from the symposium, Hascup points to the upgraded educational program. In particular, he is excited about classes that provide attendees with OEM training certificates—something that will benefit individuals greatly when they return home from the FBS Symposium.

See you at Disney World!

C.A. Wolski is a contributing writer for 24×7 Magazine. Questions and comments can be directed to chief editor Keri Forsythe-Stephens at kstephens@medqor.com. 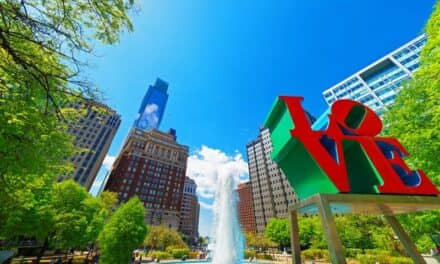 Kentucky Biomed Association Looking for Members to Get Involved