Sonora Medical Systems Inc, Longmont, Colo, a supplier of after-market products, services, and test equipment to the medical imaging, ultrasound, and MRI markets, has been awarded a patent for its FirstAssist ultrasound system-testing device.

The patent is Sonora’s seventh, and the first patent specific to the device. FirstAssist directly interrogates diagnostic ultrasound systems by injecting signals of various amplitudes, phases, and frequencies through a computer-controlled probe-simulator interface connected to the ultrasound system’s probe port. The device tests the various performance characteristics of the ultrasound system’s B-mode, Doppler, and Color Flow modalities.

Biomedical engineers and medical imaging physicists use the device to establish a baseline of performance for any given system as part of acceptance testing, as an integral part of an ongoing hospital-based ultrasound EBQA program, and for system troubleshooting. The device and other Sonora ultrasound test devices will be featured at the 2007 Radiological Society of North America (RSNA) meeting in Chicago. 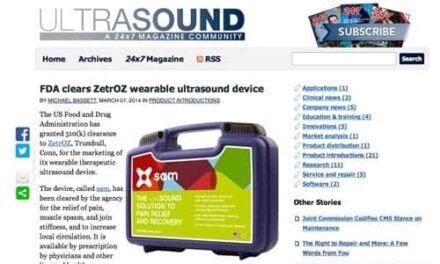