According to analysts at technology market research firm Technavio, the global portable ultrasound market is predicted to grow at a compound annual growth grate of 8.74% from 2014 to 2019. A key market driver of the global portable ultrasound market is an increasing geriatric population, while one of the key challenges identified includes growth in the used and refurbished ultrasound equipment market.

Technavio’s report, Global Portable Ultrasound Market 2015-2019, was based on an in-depth market analysis with input from industry experts. The report covers the market landscape and its growth prospects in the coming years, and includes a discussion of the key vendors operating in this market, including Fujifilm SonoSite, GE Healthcare, Philips Healthcare, Siemens Healthcare, Accutome, and Boston Scientific, among others. Key regions listed in the portable ultrasound market report include the Americas, Asia-Pacific region, and Europe.

As described in the report, portable ultrasound devices—whether handheld or trolley-based—are lighter and smaller than conventional ultrasound machines, and can be used at point of contact and operated on battery power. The systems are highly sensitive and generally don’t have the same limitations as conventional ultrasound machines, such as low diagnostic accuracy and difficulty in imaging patients who are overweight. The portable devices are considered affordable and suitable for scanning in vascular, pediatric, cardiac, endocrinology, obstetrics/gynecology, and radiology applications. End-users listed in the report include hospitals, diagnostic centers, and home care.

For more information, read the summary on the ReportLinker website. 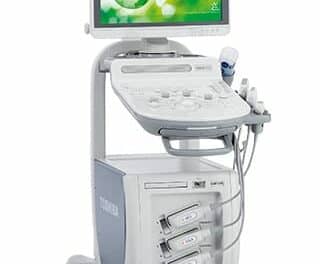