A patient-monitoring scare in 1998 prompted the Federal Communications Commission to set aside a chunk of spectrum for medical telemetry, which it did in August 2000. Since then, hospitals have been mulling their choices: ISM band or WMTS? Both have their advantages and their advocates. Read what the experts have to say: Jim Welch states the case for ISM; David Pettijohn weighs in on the side of WMTS.

No patients were injured, but the incident prompted the Federal Communications Commission (FCC) to designate a chunk of spectrum for medical telemetry. In August 2000, the FCC set aside 14 MHz for the Wireless Medical Telemetry Service (WMTS), divided into three frequency bands: 608-614 MHz, 1395-1400 MHz and 1429-1432 MHz. In April 2001, the FCC named the American Society of Healthcare Engineering (ASHE) of the American Hospital Association (AHA) as the “frequency coordinator” for WMTS. ASHE has since selected Comsearch (Ashburn, Va.) as its technical partner charged with performing frequency coordination services in the WMTS.

Medical telemetry continues to be a hot topic as hospitals debate moving to the new Wireless Medical Telemetry Service spectrum. But the existing Industrial, Scientific and Medical (ISM) radio band has its proponents, as well.

To help make sense of the torrid telemetry turbulence, 24×7 talked with the staunchest supporters of the two approaches. On one band is Jim Welch, vice president and general manager of Welch Allyn Protocol (Beaverton, Ore.), which manufactures telemetry equipment keyed to the ISM spectrum. On the other band is David Pettijohn, a longtime telemetry developer and WMTS supporter who worked with VitalCom (Tustin, Calif.) before joining GE Medical Systems Information Technologies (GEMSIT of Milwaukee) where he is manager of luminary accounts and technology. 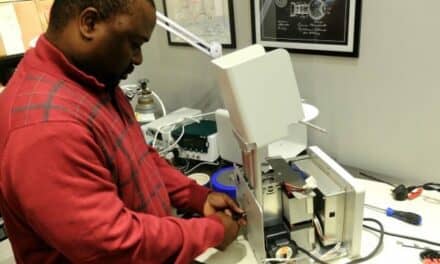 Voyage to the Bottom of the Earth