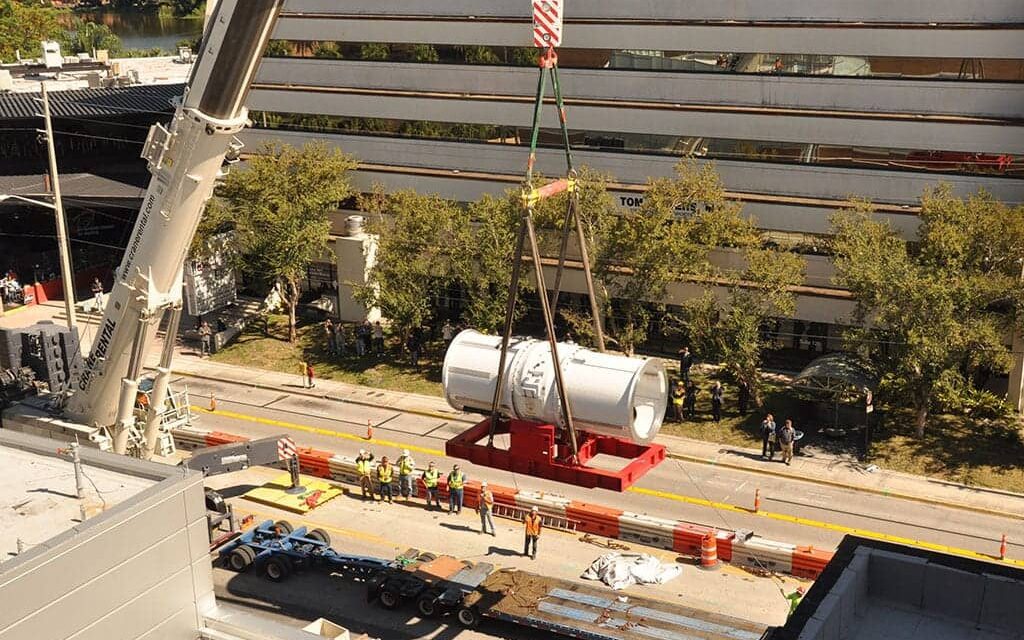 Mevion Medical Systems,  a provider of proton therapy systems for use in radiation treatment for cancer patients, has announced the delivery of a Mevion S250 proton therapy superconducting synchrocyclotron accelerator to the University of Florida Health Cancer Center at Orlando Health. The accelerator is being installed as a component of the center’s new proton beam therapy system, which will treat cancer in adults and children. Construction of the proton center is expected to be completed in 2015.

Proton therapy precisely delivers radiation doses to tumors, sparing much of the surrounding healthy tissue. This makes it well suited for treating pediatric cancers, as well as adult cancers that are located near sensitive areas, such as the heart or brain. 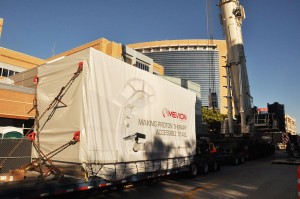 The Mevion S250 accelerator being delivered to the UF Health Cancer Center—Orlando Health. (Click to enlarge.)

The UF Health Cancer Center–Orlando Health is the first hospital in Central Florida to install a proton therapy system, according to Mevion.

“We are committed to providing the best possible care for each patient who walks through our doors,” said Daniel J. Buchholz, MD, chairman of radiation oncology at UF Health Cancer Center—Orlando Health. “Proton therapy is an important cancer-fighting tool that is now available to us with the Mevion S250 because it is significantly more cost-effective than other proton systems on the market, yet provides the same benefits for patients, giving us the option of treating with protons when we need to.”

According to Mevion, the S250 requires less space and has lower capital and operational costs than traditional systems. As a result of its comparatively small size, the S250 system can be delivered and installed with less difficulty than larger systems. Its journey from Mevion’s Boston area headquarters to the UF Health Cancer Center–Orlando Health, according to the company, was “a simple drive down I-95.” Designed and manufactured in the United States, the accelerator delivered to Orlando is one of only six in the world.

“Proton therapy is a revolutionary treatment option for many patients who are diagnosed with cancer, and we are proud to lead the way with a fiscally responsible system that provides outstanding benefits to patients, providers, and the entire healthcare system,” said Joseph K. Jachinowski, chief executive officer of Mevion Medical Systems. “The delivery of the proton accelerator to the UF Health Cancer Center – Orlando Health is an important next step toward ensuring patients in Central Florida have access to this life-saving therapy.”