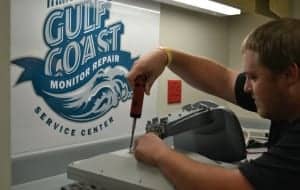 Whether it’s building an automated laboratory in-house, training fellow biomeds on high-end patient monitors, or supplying biomedical services to fellow Ascension Health hospitals in the Florida Panhandle, the TriMedx clinical engineering services department of Sacred Heart Hospital in Pensacola, Fla, appears to do it all. Led by Jim Bowles, director of the Gulf Service Center at TriMedx, the department has shown impressive growth, innovation, and a propensity to cut costs while improving service.

The success of the Sacred Heart clinical engineering department—though driven by innovation and hard work from each member of the team—is fostered by the resources afforded by TriMedx. An affiliate of Ascension Health, TriMedx has grown to the point that individual biomeds and clinical engineering departments are given the ability to innovate and improve the facilities they work for. This is never more apparent than through TriMedx’s service center of excellence program.

“TriMedx empowers its associates to be entrepreneurs,” Bowles says. “If there are ways to create savings and success within the company, you can bring your idea to a service center of excellence board. Then, if it’s a reasonably attained project, a service center of excellence can be created to provide those added resources and value-added services to our TriMedx sites. For me, I have not only the Gulf Coast Laboratory Institute, but I also have the Gulf Coast Monitor Repair Center and a couple of other ones that we’re getting ready to look into.”

“This is the part where we have a great advantage to what I’ll call stand-alone biomed shops,” says Joe Skochdopole, CCE, executive regional director at TriMedx, based in Indianapolis. “We have such a large scale now that we can experiment, and put some money into things where individual hospitals just can’t and won’t do that.”

The Freedom to Grow 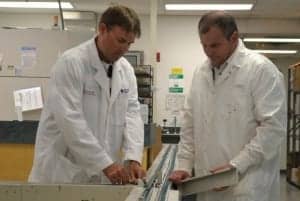 TriMedx has given its clinical engineering departments the freedom to cultivate and utilize the unique talents of its respective departments. Few have been as successful and effective as the shop at Sacred Heart.

The Sacred Heart department has several seasoned laboratory experts. Difficulties repairing laboratory equipment abound for even the most seasoned biomeds: The equipment is largely stationary and must be repaired on-site, and uptime is a premium, creating a stressful work environment with working laboratory technologists in the vicinity. Add the sensitivity of most laboratory equipment to those complications, and specialized training is a must. As such, members of the Sacred Heart clinical engineering department took it upon themselves to establish a way to train fellow biomeds to work on the equipment.

“They started doing all of the laboratory work down in Pensacola and said, ‘Why don’t we set up our own simulated laboratory and begin to teach others about what we’ve learned so that they can begin to do laboratory work at their facilities,’ ” Skochdopole says. “You can’t really pick up an analyzer and ship it somewhere to be fixed and then ship it back because the calibration is so critical. You have to do all of that on-site. So they set up a simulated laboratory environment in Pensacola, and they fly people in from all over the United States from TriMedx and train them on the basics of laboratory service.”

“It’s a 2-week-long training program that provides education and training for respective laboratory technicians and engineers who are going into the field, to give them the basics of the laboratory that is expected by the OEMs when they get to their training,” Bowles says. “It talks about laboratory electronics, laboratory fluidics, and all the other things that someone who is going to a laboratory should know.”

These laboratory experts were also critical in saving Sacred Heart tens of thousands of dollars. When the hospital needed to relocate its laboratory, administration desired an automated system to perform tests. Rather than pay a big-name manufacturer to build an automated laboratory, all of the development and maintenance was kept in-house. Where manufacturers asked for 2 weeks and upward of $80,000 to build the new lab, the in-house staff was able to build the laboratory in only 5 days and for a fraction of the price.

“Here in Pensacola, we have the largest, fully operational automated laboratory within Ascension Health without the use of any service contracts,” Bowles says. “We provide the services on all of our laboratory equipment with the help of only one service contract, which is mandatory.”

The Sacred Heart clinical engineering department offers more services than just the Gulf Coast Laboratory Institute. The Gulf Coast Monitor Repair Center has also been able to save the hospital—and surrounding facilities—thousands of dollars through the reverse engineering and repair of high-end monitors. After investigating a broken monitor themselves, members of the department realized that the problem with many of these monitors was simply a lamp. After having a local custom lamp shop reverse engineer the part, the Sacred Heart department has been servicing these monitors in-house and avoiding expensive repair and replacement costs.

All of this innovation, however, would not be possible were it not for the leadership of Bowles and the community that he has developed at Sacred Heart. Having started at Sacred Heart in 1979, Bowles has seen the growth of the department and helped lead it over numerous years, cultivating both a sense of achievement and success, as well as a family atmosphere that drives the department to greatness.

“The team that we have here at the Gulf Coast Service Center is a remarkable team,” Bowles says. “We take on every challenge that is brought to us with the idea that we can solve it. We have great camaraderie within our group and see ourselves as a large family working together instead of just coming to work every day. With TriMedx, they have provided us an opportunity to be successful in all of the endeavors that we undertake. Sacred Heart Health System is a great health system to be working with as well. They, like TriMedx, have provided great leadership for us, and we appreciate everything that both Sacred Heart and TriMedx provide for us.”

“Jimmy Bowles is a legend there,” Skochdopole says. “You walk around the hospital, and Jimmy knows everyone from the chief medical director to the guy that’s mopping the floor in his shop. He is friendly with them all. He is part of that family down there. I think that’s one of the things that Sacred Heart does so well. They get opportunities to do stuff because they know everybody, they’re involved with it, they help out; they’re part of the fabric of Sacred Heart. The person that sets that up is Jimmy. He leads by example, so he has a great crew that is the same way. They’re more than just some mechanics in the basement with a screwdriver fixing medical equipment. They’re a big part of the family at Sacred Heart.” 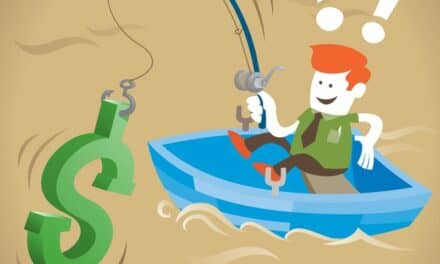 In-House or Not? How One Department Makes the Calculation