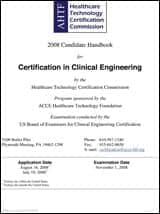 Incident/Untoward Event Investigation is one of the areas of the CCE examination under the topic of “Risk Management & Safety.” For a complete list of CCE Examination topics, see the new 2008 Candidate Handbook for CE certification available at www.accefoundation.org/certification.asp.

Responding to an Incident

There should be written policies and procedures to guide the staff on how to respond to a medical equipment incident and subsequent investigation. In a health care organization, it is usually the facility risk manager who serves as the coordinator of investigations. The risk manager is usually responsible for developing incident protocols, coordinating the organization’s immediate and ongoing response, and working directly with the relevant staff and the facility’s legal counsel. The clinical engineer (CE) or biomedical equipment technician (BMET) usually works closely with the risk manager in gathering initial information and evidence about what happened. The CEs or BMETs are most likely to be called as first responders in an incident. Sometimes they may hear about incidents days later.

A thorough and prompt incident investigation should be undertaken as a response to an incident. Incident investigations are conducted for a number of reasons, including to determine the cause of the incident, avoid future incidents, respond to insurance/legal claims, improve patient safety, and address the accreditation requirements of some agencies.

The Joint Commission standard PI.2.30 requires the health care organization to conduct a root cause analysis of incidents that focuses on processes and systems.

Investigation of an incident requires special skills and training. These investigations usually require interviewing members of the clinical staff to determine the cause of the incident and examining the relevant clinical records, as well as thoroughly inspecting/testing the equipment involved, reconstructing the incident, examining the evidence, reviewing databases (eg, the FDA’s Manufacturer and User Facility Device Experience (MAUDE) database) for adverse events involving similar equipment, and analyzing the equipment’s maintenance and repair history.

To avoid a conflict of interest, one recommendation is that hospital CEs and other biomedical engineering staff should not act as a primary investigator when they maintain the medical equipment involved in the incident. In these cases, an independent CE should be hired. An independent CE may work as a consultant or may work as a CE in another organization.

An incident involving a patient injury or death may lead to a lawsuit. It is important for the CE or BMET to be familiar with some of the commonly used legal terminology.