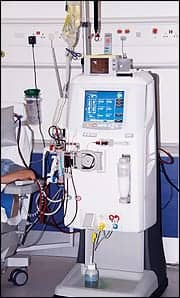 Patient interaction is inevitable in the biomedical world, but working on a machine while it is attached to a patient is rare. Factor in beeping alarms and worried relatives, and suddenly the solace of the workshop can seem a long way away.

Fortunately, professionals who maintain dialysis machines are prepared to deal with problems that happen during a “run” (dialysis treatment). While most technicians will opt to stop treatment and move patients to a different unit, biomeds such as Chelsy Cross, CBET, will take a deep breath and begin troubleshooting. “I’ll do a quick scan and try to stay focused while all the bells and whistles are going off, nurses are freaking out, and the family is sobbing,” Cross says, a clinical engineer at Seattle-based Swedish Medical Center who worked on dialysis machines for 4 and a half years before moving on to imaging earlier this year.

Far from neglecting patient concerns, Cross demonstrates a deep respect for the time and trouble it takes for people to come in and sacrifice hours of their life hooked up to a machine. If he can reduce that time, and the patient is not in danger, he believes it is worth a try.

Experience tells him to first rule out trans membrane pressure (TMP) issues, and that could mean air in the line or air in the dialyzer. If the line is free of air, Cross checks for leaks because it could be positive or negative pressure causing the TMP alarm. “Most people won’t even attempt to repair it in the room because it is just too stressful,” Cross says. “If I have a very good idea of the problem, or if I can hear where the problem is, I’ll try to fix it in the room, because that is less invasive for the patient. If I can’t solve the problem in the room, I’ll tell the nurse we have to return blood and get another machine.”

The familiar whir of a dialysis machine is often interrupted by subtle hiccups that alter the sound and provide vital clues to the problems within. After quieting the alarms, Cross can use his ears to listen for a leak inside the chassis.

In one situation with a pediatric patient, Cross diagnosed a problem during the run because he did not want the child to endure treatment any longer than necessary. Hearing a telltale leak in the chassis, he correctly predicted that one of the lines had come off of the ultra filtration (UF) pump. With nothing but a trusty screwdriver and sensitive ears, Cross took the panels off and confirmed that one of the lines had popped off due to pressure. He ended up with a dialysate leak on the floor, but continued the run after reconnecting the line.

Stopping a run means that patients must literally return blood to their bodies. An interruption of treatment also necessitates preparing another machine, a process that takes 20 to 30 minutes. “Everyone is inconvenienced,” Cross says. “Not only does it waste the patient’s time, but also the nurse’s. So if, for example, a fuse pops in the power supply, we biomeds can replace a fuse in under 3 minutes, and it is worth doing.”

In one recent incident, staff members lamented that water would not flow to the machine. Instead of a complicated repair, Hazelton concluded that the “connector was disconnected”—an easy fix for the Michigan-based biomed who has worked on dialysis machines for almost 15 years. “It is not super important for nurses to know exactly what is going on inside the dialysis machine, but they need to know the basic functions,” he says. “The nurses then have a nurse educator who will train them on the use of the machine and what it is doing.”

Only one person at a time can use a dialysis machine, but multiple patients can use the same water system. Not surprisingly, CMS regulators have correctly noted that problems with one water system can endanger many patients. To prevent these dangerous incidents, bacteria and endotoxin levels are meticulously checked when assessing the quality of water used in dialysis.

Endotoxins are pyrogenic (fever-causing) fragments of bacteria when in the bloodstream. Endotoxin presence in water is tested with limulus amebocyte lysate (LAL), a product extracted by microbiology labs from the circulating blood cells of horseshoe crabs. If endotoxins are present in a water sample, LAL binds with them to form clots or gels. “If endotoxins get into a patient’s body, he or she could have a reaction right there on the machine,” Hazelton cautions. “Our biggest concern with dialysis is making sure the water is clean and our endotoxin levels are down low enough to avoid pyrogenic shock or infections due to the blood contacting the dialysate in the dialysis machine.”

Unlike the old days, there are now endotoxin tests that allow for facilities to check levels in-house. “We used to have to send those out, which took time and about $50 per test,” Hazelton says. “A company in Cape Cod, Mass, called The Associates of Cape Cod makes these LAL test kits, and you can actually have your sample read within half an hour after you have taken the sample. Sending them out makes me uncomfortable because you have to wait 48 hours, and you don’t know if bacteria levels are too high or too low. I wish we could instantaneously read bacteria and endotoxin levels in the water. That would be the greatest invention I can think of for dialysis.”

As for reusing the dialyzer multiple times for the same patient, Hazelton and his staff decided against the practice a while ago. Originally done as a way to save money, reuse is time consuming for technicians and ultimately spawns too many hazards.

“As a money-saving service solution, we found reuse was not as cost effective as we thought,” Hazelton says. “Now we use a new dialyzer each time. I think the guidelines have even tightened up with reuse, especially with regards to cleaning.”

The Newer the Better

New versions of dialysis machines usually work out the old bugs, while occasionally causing new headaches. Larry Norcini, BMET II for Crothall Services Group, clinical equipment services, who works at Saints Medical Center, Lowell, Mass, encountered some initial filter problems on the latest Fresenius, but he says the machines eventually broke in and the filters have begun to last longer.

Norcini works on three different Fresenius machines: the 2008H, the 2008K, and the K2, which is essentially the same as the K but with a different panel. “As of February 2010, certain parts of the H machine [the oldest of the three] are no longer available, because they stopped manufacturing parts for the older machines,” Norcini says. “They are getting old, and we will need to replace them over the next few years. I would say 50% of the parts are the same in both machines, but the differences are major such as blood pump modules or PC boards. They are completely different, so we will either have to buy from an aftermarket source, or just get all new Fresenius machines—which is what we are pushing for.”

Hemodialysis: Used for patients with kidneys in renal failure, this process removes waste products and free water from the blood.

Continuous Renal Replacement Therapy: According to Critical Care Medicine Tutorials, the purpose is to “dialyze patients in a more physiologic way, slowly, over 24 hours, just like the kidney.” See: www.ccmtutorials.com/renal/rrt/page6.htm

Peritoneal Dialysis: An alternative to hemodialysis, this method introduces the fluid through a tube that is permanently inserted into the patient’s abdomen, allowing the patient to have treatment without going to a medical facility.

Whether machines are old or new, Norcini and many other biomeds must occasionally throw out the playbook and tackle anomalies. Occasionally, “foreign items” find their way into dialysis machines, blocking small filters and check valves.

“I have experienced problems on machines where no conventional way of thinking can explain how it broke or how to solve the problem,” Norcini says. “I once dealt with a relay failure, which turned out to be related to a heat failure. I had never experienced it before, and then finally I traced it down to a power control board.”

Norcini agrees with Cross that TMP problems are always tough. With pressure pushing and pulling, variables are numerous, and especially in older machines the issues can be tough to track down.

“In the newer machines it’s not bad because extra filters may be stopping things that might have been getting through,” Norcini says. “If there is a TMP or flow error problem in a newer machine, you know it could be the Diasafe filter, so try that right away. Nine times out of 10 you are good to go.”

In most common troubleshooting scenarios, solutions come down to patience and common sense. In the world of dialysis, these traits are learned on the job and through manufacturer training programs.

“If you know absolutely nothing about dialysis, I would recommend you job shadow a tech that is doing dialysis and see what they go through on a daily basis,” advises Shane Lineberry, CBET, a clinical equipment specialist III at Wake Forest University Baptist Medical Center, Winston-Salem, NC. “There is a lot to know about dialysis and machine maintenance, but you also must know the American Association of Medical Instrumentation (AAMI) standards for things such as water treatment. It just so happens that last week the state inspector came in and did a surprise audit of our dialysis unit at our medical center. AAMI standards and proper documentation are key with dialysis, because so much has to be calibrated or quality checked—and you have to have documentation.”

In Lineberry’s case, inspectors were from the state of North Carolina, even harsher critics than The Joint Commission. For those who have yet to be inspected, Lineberry says officials focused on all aspects of water filtration. “They are checking for the water hardness level, so you have to be on top of checking the chlorine level, the pH level, and you also have to know what to do in case a certain level is too high,” he says. “If you check your chlorine with a chlorine meter, they want to see that the chlorine meter is up to standard. Have you had a quality check done on it? When was that quality check, and how do you know your meter is telling you the right information?”

Even if all the proverbial ducks are in a row, the art of biomedical work often shines in the ability to improvise. Lineberry once tackled a confounding problem on a Gambro Phoenix unit after the machine failed a pressure in/pressure out test—which essentially checks the two pressure transducers. After combing through virtually everything in the circuit, he ended up replacing both pressure transducers.

When the problem persisted, he moved on to the electro valves, checking them one by one. “There is a filter on one of the valves, and a piece of the filter had come loose and gotten inside the valve body,” Lineberry says. “It was just a tiny piece of debris, but it kept the valve from closing, and during the test process it could not hold the pressures without leaking. Needless to say, it is not one of the things they put in the service manual.” 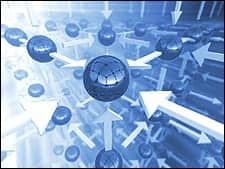