Day in the Life: Dr

Amid farmland in Telford, Penn., the North American headquarters of anesthesia-system manufacturer Dräger has hosted many technicians in search of training, but now there’s a new sight to see at the plant, a museum featuring the progression of anesthesia technology from basic ether masks to electronically-controlled delivery systems. And just when you thought you’ve seen it all, there’s the lavender Narkomed.

German engineer Peter Schreiber was noticed by influential New York City anesthesiologists soon after he arrived in America. That’s because the machines Schreiber was building for veterinarians (such as the Narkovet Stand Model seen right) were better than contemporary human designs.

Schreiber launched North American Dräger (NAD) with two partners and the first Narkomed 1 for human anesthesia was purchased in 1972. NAD was brought under the world-wide umbrella of Dräger when Schreiber retired a few years ago.

Jim Yoder joined the company 23 years ago as a machinist and learned vaporizer design and theory of operation from Schreiber. Yoder shared this knowledge with students in NAD’s technical training classes, where his exquisite cutaway vaporizers helped demystify anesthesia delivery.

The museum became an official part of Dräger’s Telford, Penn. facility in 1993. Says Yoder, “It began as a means to illustrate to students how advances in anesthesia machine design were really quite recent.”

Anesthesia Machine #3, or AM III, debuted in 1977. “This is the most important piece in the museum as it represents a turning point in the way anesthesiologists thought about their anesthesia machines,” states Yoder. “In all, there were about 20 different ‘firsts’ included in this machine.” But at $12,500, it was considered too expensive. Two years later, a widely-publicized patient death put anesthesia under scrutiny. “That tragedy, and the fact that a patient-safety based design was already available, combined to put this company on the anesthesia map to stay.” 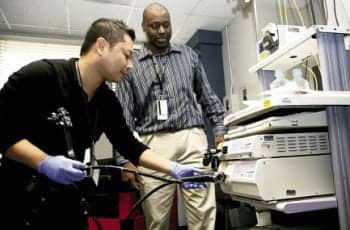 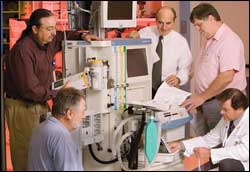