When the first Fluoroscope was created in Thomas Edison’s lab, there was probably somebody there who complained about the image quality. It’s the same today. Faced with an angry radiologist, many imaging service techs get harpooned. Here’s how to conquer fluoro with logic.

The discovery of X-ray radiation by Wilhelm Conrad Roentgen in 1895 marked the dawn of a new era in diagnostic medicine. Within months, X-rays were routine in daily practice. However, the person who brought X-rays to the public’s attention was Thomas Edison, who demonstrated the first Fluoroscope at the New York Electrical Exhibit in 1896. Attendees viewed the shadows of bones on a fluorescent screen — a thrilling and memorable experience that inspired widespread public acceptance of X-rays.

Today, fluoroscopy remains a valuable diagnostic tool for radiologists. Its most common uses include examinations of the abdominal and pelvic organs, guiding catheters during angiographic procedures, and orthopedic surgery.

Although the basic principles still apply, fluoroscopy equipment has changed considerably since Edison’s day. The original image receptor was a fluorescent screen, hence the name fluoroscopy. These were replaced by the image intensifier or II. The input surface of the II is coated with a layer of cesium iodide which, when excited by X-ray photons, emits light energy in the green region of the visible light spectrum. The light is amplified through a photomultiplier design. Early IIs focused the shadowy green image onto a mirror mounted on the top of the II and the radiologist craned his head to view the patient’s anatomy.

Replacing the mirror with a television camera made fluoroscopy less of a pain in the neck, and more appropriate for interventional procedures. The black-and-white video image mimics mimics a diagnostic radiograph. By placing the monitor in a convenient spot, several radiologists – and the patient – can view the video.

A Look at Nursing Informatics 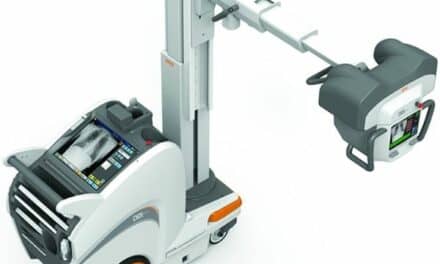