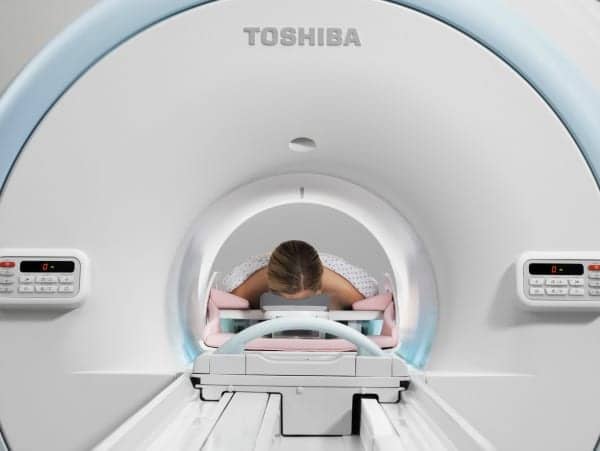 Over the course of a woman’s lifetime, there are many reasons she may need diagnostic imaging—ranging from an ultrasound to visualize her baby in utero, to an echocardiogram to measure heart activity, or to a bone densitometry test to detect signs of osteoporosis in her later years.

But by far the technology most often associated with women’s health is the mammogram. In October, during “Breast Cancer Awareness Month,” many women will be reminded of the importance of an annual mammogram. This potentially life-saving test has long been an important tool for preventing breast cancer deaths in women 40 and older of average risk.

Mammograms are still the gold standard, but for women with dense breasts, other modalities such as MRI and ultrasound have also proven useful for breast cancer detection and diagnosis. The ultimate goal of any breast imaging technology is to find the cancer early, giving the patient more treatment options and a better chance of survival.

A New Era of Breast Imaging

Over the past decade, breast imaging has undergone several changes, many of which have driven the field forward, but challenges still remain. Most facilities that perform mammography have transitioned from screen/film to digital, experiencing vast improvements in image quality and workflow.

In 2015, Congress introduced a bill called the Breast Density and Mammography Reporting Act, which would require mammogram reports and patient summaries to include breast density information on a federal level. Some 21 states already have such legislation in place. Women with dense breasts are notified when they have dense breasts and have the option to undergo more screening with MRI or ultrasound. Both MRI and ultrasound have been recognized by the health care field as appropriate adjuvant screening technologies, and as such the volume of these procedures has increased drastically.

Additionally, the American College of Radiology (ACR) established a system for classifying breast screening findings for mammography, ultrasound, and MRI called BI RADS, which stands for Breast Imaging Reporting and Data Systems. With this quality assurance tool, radiologists have a standardized method of communicating a patient’s risk for developing breast cancer.

Because mammography uses ionizing radiation, a known carcinogen, there is always the concern to maximize image quality while keeping the radiation dose exposure to patients as low as possible. Emerging technologies are addressing this limitation. For example, the Philips MicroDose SI technology counts photons one-by-one, limiting radiation dose without sacrificing image quality.

Current innovations in mammography include 3D techniques, such as digital breast tomosynthesis, that allows for better sensitivity than conventional mammography.

“Mammography screening is not a perfect tool and—in extreme cases, mainly for women with dense breasts—many cancers are not detected,” says Jonas Rehn, Philips Healthcare’s senior product manager for mammography solutions and global diagnostic x-ray. “New technologies such as tomosynthesis and the use of complementing modalities such as ultrasound, have been reported in the literature to help increase sensitivity.”

In addition to sensitivity in locating the cancer, specificity in distinguishing cancers from non-cancers is also needed, as a current challenge in mammography is the rate of recalls for non-cancers. False-positive mammogram results require additional testing, sometimes causing unnecessary anxiety and high cost for the patients and providers. Another concern is over-diagnosis, where cancers that otherwise would not have caused harm are treated more aggressively than required.

Rehn said tomosynthesis has, in some studies, shown reductions in recall rates. He adds that extracting more information from the mammography exam through spectral analysis is another approach that is attempting to address this limitation.

While ultrasound may traditionally be thought of as a modality for Ob/Gyn applications, it is in fact very adept at visualizing any soft-tissue organs and other structures, including the breast.

One of the reasons ultrasound has come to the aid of breast imagers is because it can detect cancer in women with dense breasts, which may have been missed by mammography. For example, a score of BI RADS 0 warrants additional imaging and most often the patient is sent for a follow-up ultrasound.

Some imaging facilities have automated breast ultrasound systems, but for the most part, facilities are still performing the screening exams with handheld technology since that machine can be used at all times. With ultrasound, the sonographer can detect the presence of a lesion and if there is one, he or she can look for features that indicate whether or not it is likely to be malignant.

“The most important thing with ultrasound is to have a good two-dimensional, real-time image,” says Cindy Rapp, senior clinical marketing manager at Toshiba America Medical Systems. “That’s what makes or breaks your diagnosis––if you don’t have good image quality, you can miss the some of subtle features you’re looking for on the malignant lesions.”

Rapp says that the image quality produced by ultrasound technology continues to improve with the development of higher-frequency transducers. She said other features, such as color Doppler, might help in the diagnosis of high-grade cancers, which grow rapidly and tend to occur in younger women. Color Doppler can also help tell if a mass contains bloodflow inside of it, which is a sign of a solid tumor that should be biopsied. Toshiba’s Superb Microvascular Imaging (SMI) is able to use low velocity flow and high frame rate to visualize a tumor’s minute branching vessels.

Another useful feature of ultrasound is elastography, which can evaluate the stiffness of a lesion, giving an indication of how the cancer has invaded the surrounding tissue.

A limitation of ultrasound, however, is that it does not have the resolution to detect ductal carcinoma in situ (DCIS), the most commonly diagnosed form of breast cancer. Both the calcifications that signify DCIS and the breast duct lining in which they reside appear as white. Rapp likens this to “looking for a polar bear in a snow storm.” On the other hand, mammography is best at detecting DCIS because the calcifications show up as white against a dark background, making them easier to spot.

Lesions outside of the breast ducts show up as gray or dark areas against the white background of dense breast tissue. On average, ultrasound detects cancers that are a centimeter in size, but easily finds cancers as small as a few millimeters. Rapp says that the quality of the ultrasound is as good as the skills of the technologist holding the transducer.

Toshiba, for instance, offers MicroPure technology, which highlights or emphasizes microcalcifications in the lesions that appear as twinkling stars.

Over the past decade, MRI has made an impact on breast imaging as a more sensitive imaging technology. Because an MRI may detect some cancers that mammography would miss, it should be used in addition to, not as a replacement for, a screening mammogram, according to guidelines issued by the American Cancer Society.

Other considerations for MRI include the costs and length of exam time. Compared to mammography or ultrasound, which are relatively quick, a patient undergoing a breast MRI lays in a potentially uncomfortable position for a longer period of time.

Also, because of the longer exam times, patient throughput is slower. Over the past decade, both patient comfort and imaging speed of breast MRI have improved. There are continued efforts underway to develop faster protocols to make the MRI exam even shorter. The cost of an MRI is also much higher for this imaging modality than others, which can be a potential barrier.

From a facility standpoint, the standard MRI configuration is not equipped for breast imaging so more accessories and options are needed in order to be able to perform breast imaging. Also needed are a special diagnostic workflow that considers the proper protocol for screening, diagnosis, and follow-up.

Bore size has also increased over time from 60 cm to 70 cm. The wider bore allows for larger patients to be imaged more comfortably. Overall, the MRI field has benefitted from sizeable improvements in both hardware technology and analysis software. MR can be used as a tool to determine response to therapy, according to Ivancevic. In the coming year, he predicts that monitoring assessment tools and sequencing and acquisition technology will be able to follow exams over time. Decision support tools, such as computer-aided detection systems, will continue to become increasingly useful.

Screening for breast cancer is as individual as the woman undergoing it––there is no one-size-fits-all approach. The choice of modality hinges on the patient’s identified risk pattern. Rehn says, “An important parameter in this will be breast density, where we need objective ways to measure density and optimize screening protocol.”

As with any imaging test, there are benefits and limitations that patients should understand. But with more options available for screening than ever before, the health care system is better able to deliver screening that catches cancers and other threats to women’s health.

The imaging modalities are not only always improving, but they also complement one another, providing a more complete and personalized picture of women’s health than any one imaging test alone.

Besides breast health, another important concern for women is the condition of their bones. After menopause, women are susceptible to developing osteoporosis, a disease marked by bone loss caused by depleted levels of calcium. The disease is common and serious, as thin, fragile bones may easily break from a fall or, in serious cases, a bump.

Fifty-four million Americans are estimated to have osteoporosis and one in two women aged 50 and older will break a bone due to osteoporosis. Many complications can accompany fractures, including permanent pain and hunched-over posture. Because of the size and scale of the problem, fractures tied to osteoporosis are costing the health care system approximately $19 billion every year. And with an aging population, by 2025 that number is expected to surge to $25 billion a year managing more than 3 million fractures.

Therefore, it is important to have technology that can detect osteoporosis earlier and as accurately as possible. Bone mineral densitometry is currently the most accurate method to measure bone mineral density, and it’s primarily used to diagnose osteoporosis or osteopenia (low bone mass) and to aid in fracture risk assessment.

The technology uses low-dose x-ray technology, which delivers less radiation exposure than a consumer would absorb flying in a plane from Los Angeles to New York, and typically images the lower spine and hip region. Indications for bone densitometry are for women age 65 and older or young people with certain high-risk factors that involve bone loss. The test is simple, quick, and noninvasive––it requires little to no special preparation. Most patients need to come back for routine evaluations every two years.

As the demand for this type of imaging increases, facilities with the technology often partner with service providers to keep the equipment in optimal condition. Earlier this year, Alpha Source, a HTM solutions provider based in Milwaukee, became the authorized service provider for GE Healthcare’s bone mineral densitometry products in the United States.

Jane Kollmer is a contributing writer for 24×7.