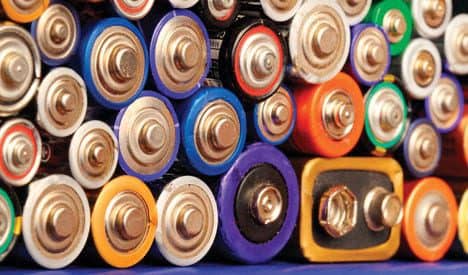 If you don’t know the answers to these questions, it’s time to bone up. As healthcare delivery moves increasingly to mobile solutions, batteries are becoming an ever-more important element of healthcare technology management.

So why are batteries used in the first place? Imagine the world without batteries. Wires would be strung all over, cars would still be started with a hand crank, devices could only be used inside a building or with a long power cord, all the settings would have to be re-entered after a power failure, and nothing would work when the power source is out of reach. Manufacturers today place batteries in a device for a wide range of reasons, including the following:

A battery or cell consists of several parts: a cathode or positive terminal, an anode or negative terminal, a separator that keeps the internal chemicals from mixing but allows the ions to pass through, and an outer casing to hold it all together.

The anode, when connected to a load (completing the circuit), will produce electrons. The cathode will absorb electrons, using the load as a circuit path allowing for the flow of electricity. This process will continue until one side is depleted of its stored charge. During a recharge, the flow of electrons is reversed and the cell’s charge is restored.

Batteries are available in many different shapes and sizes, including button type; small AA and 9-volt types; medium size, like those used in a laptop; or large, like a car battery. Each battery configuration has a specific voltage and current rating designed to meet the needs of a specific type of application.

A special word of caution about smart batteries: They contain a fuel gauge on the outside of the battery indicating the cell’s current level of charge, not the battery’s capacity level. For that reason, you cannot assume that a gauge that indicates a full charge means the battery is good. Similarly, a low level indication might be the result of a bad gauge rather than a bad battery.

Alkaline. Consisting of zinc and manganese dioxide, the alkaline battery was invented in 1899 and became commercially available in the 1950s. Up to 80% of the batteries manufactured in the United States are alkaline. Their size can vary from a button to the small AAA and the 9-volt type. Alkaline batteries are prone to leaks when in storage or installed in devices. They have a long shelf life owing to their slow discharge rate.

Lead-Acid. Invented in 1859, it became mass produced in 1881. The sealed version that came out in the 1970s consisted of a gel instead of a liquid so the battery could be used in any position without leakage. From 40% to 45% of the batteries in use worldwide are Lead-Acid. They are used in automobiles, UPS units, and electric wheelchairs. Lead-Acid batteries are prone to gassing, explosions, and corrosion of the terminals.

Nickel–cadmium (Ni-Cd). The electrodes of the Ni-Cd or NiCad battery consist of nickel oxyhydroxide and cadmium. The Ni-Cd was invented in 1899 but was not used commercially until 1906. It comes in all sizes from button up to large form factors. This type of battery can tolerate a deep discharge and can accept many charges and discharges. Its disadvantage is that it can develop a memory and create its own maximum charge level, thus reducing its capacity.

Nickel-Metal Hydride (NiMH). In an NiMH battery, the electrodes consist of nickel oxyhydroxide and a hydrogen alloy. The technology was invented in 1989. These types of batteries are mostly small size in size, from AAA to 9-volt. NiMH batteries are better than Ni-Cd batteries because of their high storage capacity for their size (energy density). The disadvantage is that they discharge when not in use, at a rate as high as 30% in the first month. Therefore, storing them long-term is not option. They must be used soon after purchase and charged overnight before testing the device for proper operation.

Lithium. The anode of this type of battery contains a lithium metal. It was invented in the 1970s and comes mostly in the button format. Lithium batteries have a long life and are used in holding date and time, software configurations, and error logs. They are found in computers, phones, and life support devices. Because of their small size and common use, they pose a choking hazard for children. They have a relatively long shelf life because of their slow discharge rate.

Zinc–Air. In a Zinc-Air battery, the main electrode is zinc. When it is exposed to air or oxygen, a chemical reaction begins and produces voltage. Zinc-Air batteries are stored in a sealed bag or container until ready for use. The self-discharge rate is as high as 30% when the bag is exposed to air, but if left sealed, the shelf life can be as long as 3 years. The Zinc-Air battery was invented in 1932 and comes in the button size and a small size similar to the 9-volt format. They are used primarily in hearing aids, pagers, and cardiac telemetry.

Table 1. Types of batteries and their characteristics. (Click to enlarge.)

With this information in hand, here are some suggested practices to help get the most out of the batteries you work with.

Since batteries were first introduced in the 1700s, their technology has evolved substantially, but their main purpose has remained the same. Only their size, chemical composition, and recharging capabilities have changed.

All batteries have different uses and chemical compositions, so when storing, charging, and handling them, be aware of their differences and it will pay significant dividends. Finally, remember that all batteries need to be recycled because of the harsh chemicals they contain. 24×7