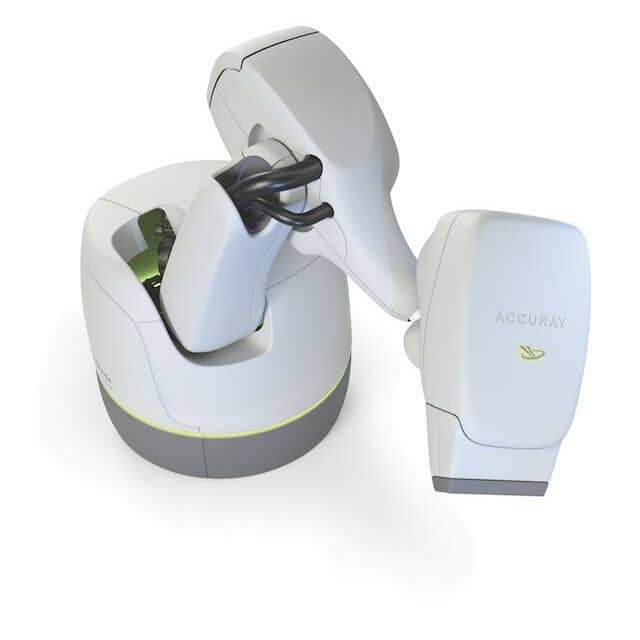 Accuray Inc., based in Sunnyvale, Calif., has announced that data from a prospective study of 230 men with low-risk prostate cancer showed 98.4% had local disease control 10 years after receiving stereotactic body radiation therapy (SBRT) administered with the CyberKnife system, and toxicity was mild.

“This is a groundbreaking study—the first to report on the efficacy and toxicity of SBRT in the treatment of low-risk prostate cancer following 10 years of treatment,” says Alan Katz, MD, of Flushing Radiation Oncology. “All patients participating in the study were treated with the CyberKnife system, which delivers extremely precise radiation treatments using unique, real-time image guidance and automatic motion correction. The study outcomes were excellent both in terms of disease control and tolerability, and were superior to long-term conventional intensity-modulated radiation therapy, based on results from other studies.”

The prostate gland can move unpredictably throughout the course of treatment, making the ability to track, detect, and correct for motion critically important. Throughout the course of treatment, the CyberKnife system continually collects images to determine exactly where the tumor is, ensuring that clinicians deliver radiation exactly where they want it. The system detects the tumor motion and automatically adjusts the radiation beam in real time to match the motion of the tumor, giving clinicians confidence to apply smaller treatment margins and enabling higher doses and fewer treatments.

“Following early stage prostate cancer diagnosis, men have a variety of treatment options from which to choose,” says Fabienne Hirigoyenberry-Lanson, vice president of global medical and scientific affairs at Accuray. “CyberKnife prostate SBRT is increasingly being selected by men with low- or intermediate-risk disease who opt for treatment with radiation therapy. This new CyberKnife research adds to the most extensive compendium of published prostate SBRT studies available in the industry.”

The Altruistic Motives in Clinical Engineering