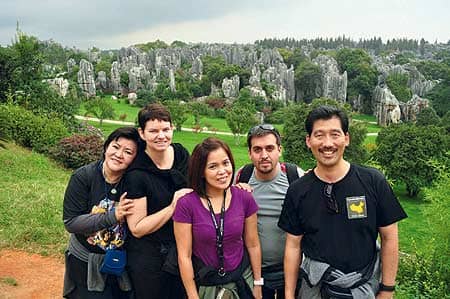 Michael Y. Young (far right) shares this photo of volunteers from Ecuador, Saudi Arabia, and the Philippines at the limestone formations at the Stone Forest in the Yunnan Province, People’s Republic of China, after his Operation Smile mission in Yuxi, China.

David Sieminski, AA, a senior field service specialist in Sacramento, Calif, for Philips Hospital Respiratory Care, became committed to biomed mission work the way many do. The work chose him.

After a level 7.0 earthquake devastated Haiti in January 2010, Sieminski’s employer, Philips, donated nearly $1 million worth of equipment to Hôpital Sacré Coeur in Milot, 75 miles north of Port au Prince. The equipment passed through the CRUDEM (Center for the Rural Development of Milot) Foundation and Sieminski became part of the disaster team organized by Philips.

For 2 days, Sieminski helped ICU nurses and physicians with ventilators and he installed equipment the rest of the trip. After 2 weeks, Sieminski told a CRUDEM worker, “I’m not done.” The CRUDEM representative’s response? “Come back!”

Sieminski has. Four times. He will go back this September. After the earthquake, Sieminski found a 73-bed hospital deluged with equipment—and more than 600 patients. Most were accommodated in tents across the street. “When I got there, it was the first time we were able to ventilate a patient with oxygen,” Sieminski says. “They had tanks, but I brought adapters and regulators. We were able to start saving patients’ lives.”

In August 2010, Sieminski used 2 weeks’ vacation time and financed much of his own way. The California Medical Instrumentation Association paid some expenses. A March 2011 visit that Philips helped sponsor involved annual maintenance. The hospital asked Sieminski to set up its biomedical/clinical engineering department, which he did with help from TriMedx. Sieminski also assisted in hiring two patient guides, and he will remain involved in their biomedical engineering training.

Mentoring reflects another mission objective—that of bringing hospitals to clinical engineering self-sufficiency. Eben Armstrong, MS, is the director of biomedical engineering training and technical services for MedShare, Decatur, Ga, a nonprofit that improves health care and the environment through efficient recovery and redistribution of surplus medical supplies and equipment, distributing them to those most in need. “We teach people to fish,” Armstrong says. 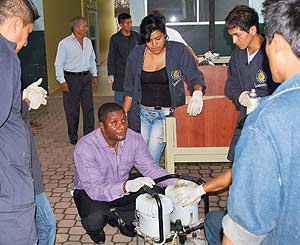 In the Pastaza Province at the Puyo General Hospital in Ecuador, Eben Amstrong (center) of MedShare leads practical repair sessions.

Armstrong has trained medical technicians, physicians, and nurses in the proper use and care of equipment in more than 40 countries. “MedShare does not have doctors,” Armstrong explains. It sends equipment in excellent working condition to specific locations and biomed teams when possible. Normally, the recipient country pays for accommodations and airfare. MedShare cannot always afford to send a team, so it ships equipment and provides after-donation support: Recipients call or Skype for remote installation and repair assistance.

Last June, two biomedical equipment technicians accompanied Armstrong to Puyo, Ecuador, for 10 days. “MedShare sent more than a half dozen 40-foot containers of equipment and supplies,” Armstrong says. “I trained hospital personnel how to use and repair the equipment.” Included were anesthesia machines, centrifuges, laboratory equipment, and more. General Electric and several hospitals donated 50 beds, most for intensive care.

Armstrong encountered favorable conditions in Ecuador. “We visited four hospitals,” he says. “Training was done in one hospital. The building was a good structure, but like so many hospitals in underdeveloped regions, they lacked biomed technicians. A lot of equipment already there was not broken, but people thought it was. It did not even need spare parts. Hospital personnel simply did not know how to use it. Some devices—such as an ultrasound machine—simply needed recalibration.”

One incubator had been abandoned for 2 years. Armstrong got it running and showed technicians how to care for it. He also worked on monitors, microscopes, a centrifuge, ventilators, and nebulizers. At a military hospital, workers gave Armstrong a gift he found especially meaningful because it represented sincere gratitude for his help.

Armstrong says the Ecuador trip was rather unusual in that MedShare was the primary sponsor. As a nonprofit, Armstrong explains, MedShare must normally rely on foundations for major funding. “Much of the work we do in Africa, for instance, is sponsored by the Coca-Cola Africa Foundation.”

Arthur Treger of the biomedical engineering department, Children’s Hospitals and Clinics of Minnesota, with hospitals in Minneapolis and St Paul, has been on two trips with Operation Smile. He has volunteered for nearly 10 medical missions total with different surgical teams over the past 3 years, and he has supported the creation of a new neonatal intensive care unit abroad.

For someone who volunteers on as many medical missions as Treger, a supportive “home team” is essential. He says that includes not just the management he reports to, which he says are “great,” considering he often gives relatively short notice and is granted the time off. “But it’s also the immediate coworkers in the department who cover for me while I’m gone,” Treger says.

All Operation Smile volunteer team members pay a $500 fee. Through the generous support of its donors, Operation Smile covers the additional expenses for logistics. Did Operation Smile provide all the equipment required for these trips? “Pretty much,” Treger says. “What is needed preop, for surgery, and postop is in the Operation Smile protocol. They fulfill that list. For biomeds, they list what equipment we’ll be supporting. The capital medical equipment that was shipped in containers was at the sites when we arrived.”

Treger appreciates Operation Smile’s organized approach, but knows to also do his own homework. “I try to collect as much information as I can before I leave. You want all the equipment you’ll need, but you can’t carry the kitchen sink!” Weight and space on trips halfway around the world are significant factors. 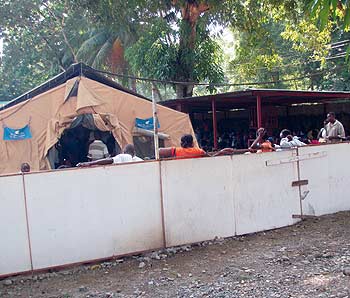 David Sieminski’s photo of the general clinic at Hôpital Sacré Coeur in Milot, Haiti, where patients came first thing in the morning each day.

“The work in both India and Jordan involved long hours in the hospital. On both trips we were averaging 10 to 12 hours daily, excluding transportation to and from the hospital.” Listening to Treger describe his biomed medical mission experiences, one gets the impression he would not have it any other way. “There are so many patients that are undergoing surgery within a certain number of days,” he says. “The surgeries have to be accomplished, and the biomed has to be certain the equipment is safe and that the patients are safe. It’s impossible to know what to expect, but you can have your bases covered, and that comes with experience.”

One reason preparation is important is that improvisation, once a biomed reaches a site, becomes the rule rather than the exception. Treger explains, “One example is the surgical tables in India and Jordan were the old hydraulic mechanical. And in one location we ended up fixing up a couple of stretchers to make them safe and suitable for the doctors to operate on.”

Treger’s Indian counterpart, also an Operation Smile volunteer, was dedicated and knowledgeable but did not have a great multimeter. Treger gave him his Fluke 112 True RMS. The Indian biomed was thrilled. Treger saw it as a token of the camaraderie and mutual respect that developed between two volunteers dedicated to helping children.

“In India, families traveled by God knows what to get the children to the site,” Treger says. “Screening took place outside in hot and humid conditions.” There were 212 patients who received comprehensive health care evaluations, and 138 patients had operations. Those individuals will be forever grateful to medical mission volunteers who improved their lives. Some not reached on that trip might be helped on future medical missions or through Operation Smile’s Comprehensive Care Centers in India. 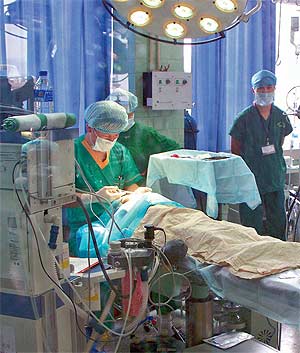 The OR during Michael Y. Young’s Operation Smile mission in Yuxi, China.

Treger’s Jordanian counterpart was a hardworking biomed. “There was a bigger language barrier, but it worked out fine. I sort of took the lead,” Treger says, somewhat becoming his counterpart’s teacher. Screening was a more comfortable affair in Jordan since there was more room in the hospital, so it took place inside.

Perhaps the most significant aspect of Treger’s professionalism, which he credits in part to his medical missions, is that the more he learns, the more he realizes there is to learn.

The resourcefulness among team members enables Operation Smile medical missions to provide much-needed surgical services in a variety of conditions. “Everyone on these medical missions wears many hats and pitches in where we’re needed to ensure safe and beneficial outcomes for our patients,” Young says.

Young’s 2-week trip to China involved 5 days of surgeries. The rest of the time was spent doing prep work. There were 251 patients who received comprehensive health care evaluations in Zhongshan, and 132 patients received operations.

Young explains that in addition to bettering patients’ lives, improving hospital sustainability is an objective—although it is an incremental process. “Some locations don’t have a biomed engineer,” Young says. “They’ve relied on a handyman there to fix anything. When it comes to hi-tech physiological monitors, it’s understandable that he’s a bit lost without manuals!” 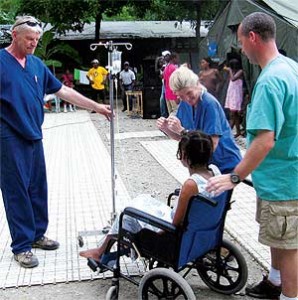 David Sieminski (L) with a patient on her first day outside after an arm amputation and liver repair from damage done by the earthquake.

Young describes giving instruction to an individual with no formal biomed training. “This fellow followed me everywhere with a translator. He watched how I set up equipment. I would give a quick lecture on how each device worked and the theory behind it. Then I ran through common scenarios. And remember, the equipment’s instructions are in English,” he says.

Two weeks later, of course, Young’s student was not a fully qualified health care technology management professional, but his experience, capacity to learn quickly, and motivation to assist the hospital staff increased his familiarity with the equipment, increasing the hospital’s self-sufficiency.

“In Cambodia, the hospital itself was in pretty good shape, but lights didn’t work in some rooms,” Young says. “After I set up the equipment, I tackled the electrical problems. You might plug something in and nothing happens. You sit there wondering, ‘Is it my equipment that’s not working? Or is no power coming out of the wall?’ Sometimes there’s no power coming out.” Nor were there blueprints to figure out what the previous person did. Young had to trace the wires.

Ultimately, the hospital’s electrical problems did not prevent Operation Smile from accomplishing its main objective: helping children. That is because a qualified biomed like Young was on the team. 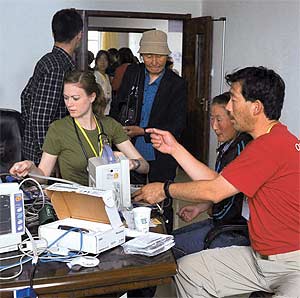 David Tandet is a contributing writer for 24×7. For more information, contact.

The Benefit of Interns 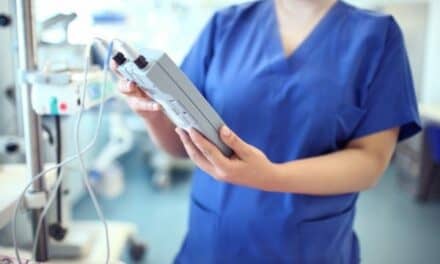