The Need to Manage Wireless Technologies in Health Care Environments 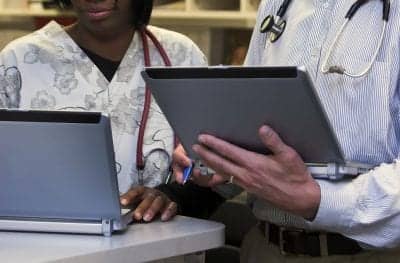 Computers influenced many industries in the mid-20th century, and health care was no exception. Advances in computing technology over the last 60 years has allowed for significant improvements in the way patients are treated and facilities are managed. With the advent of global computer networking in the 1970s, a new era in medical information accessibility had started. Today, we have access to medical equipment and information that seemed like science fiction just a few years ago. Mahajan and Schoeman1 found that only 40% of nonfederal hospitals in 1970 were using computers, while Prattipati2 referenced a 1982 study in which 98% of short-term hospitals were found to be using computers.

While computing technology was formerly a luxury, it is now a necessity. Walk into any hospital today and you will see various forms of computers in every direction. Nurses can now chart patient information at the bedside, medical equipment is manufactured with embedded computers, patient records can be stored on one machine and accessed on another, physicians can prescribe medications over the Internet, billing and scheduling is done electronically, and patients can research medical information at will. These are just small examples of how computers have affected health care.

While it is evident that computing technology has become commonplace in today’s health care settings, ever-present advances in technology continue to influence the industry. One such recent advancement is the use of wireless networking. Wireless networking has allowed computing technology to become mobile. This mobility has significantly increased the speed at which information can be accessed and has lowered the cost for certain applications that were too costly before. Many hospitals now incorporate wireless technology into their daily vital operations. Zhang and Ansari3 describe several applications now used, including emergency telemedicine, mobile patient monitoring, mobile medical data, and mobile robotic systems.

Many hospitals today are utilizing electronic charting of patient information. Before this, nurses would have to read handwritten physician orders and write all assessments in the patient’s chart. With the advent of electronic charting, errors due to illegible orders have been reduced, and the amount of time nurses spend writing assessments has decreased. Historically, electronic charting was done at a crowded central location that was not preferred by many nurses. However, wireless charting applications have allowed nurses to enter information into a patient’s record anywhere in the facility. Not only has this increased productivity, it has also reduced charting errors as information can be entered directly rather than waiting until later. Anderson et al4 observed the types of computing devices nurses utilized and found that 93.1% of observed nursing tasks were conducted using wireless computers.

Another notable advancement in computing technology was the creation of the PDA, or personal digital assistant. A PDA typically consists of a touch screen for entering data, memory expansion abilities, networking capabilities, and specialized software. Due to these devices’ small form factor, they have become popular mobile computing devices earning nicknames such as “palmtop computers.”

Lindquist et al5 researched the usefulness of PDAs for clinicians as a convenient tool for immediate access to medical information and found that the use in health care settings might improve decision-making, reduce the number of medical errors, and enhance learning for both students and professionals. As Garrity and Emam6 discovered in their study on PDA usage, it appears that professional PDA use in health care settings involves more administrative and organizational tasks than those related to patient care, perhaps signaling where the growth in adoption is most likely to occur.

One of the most recent advancements in mobile technology is the smartphone, a mobile phone/PDA hybrid device. Leon et al7 show in a 2007 study that smartphones provide immediate access to evidence-based medical resources developed at the National Library of Medicine, and that the physicians that used these devices found them easy to use.

Wireless technology has not only increased the efficiency of data acquisition, but has advanced the ability of medical equipment to diagnose and treat patients. Wireless telemetry systems can transmit patient vital signs information to a central location from anywhere in a hospital. Some telemetry systems are now designed that can transmit vital signs through the Internet from home. Infusion pumps are now being outfitted with wireless capabilities so that internal drug libraries can be updated instantly, reducing the chance of medication interactions and errors. Life support equipment, such as ventilators, wirelessly transmit self-check data to manufacturers to decrease the chance of failure on a patient.

Eagles noted two examples8 in which new advancements created problems. The first, a hospital IT department dealing with a security vulnerability in the Windows operating system, discovered that they could not upgrade medical devices because the device manufacturer needed to ensure the devices would continue to be validated for safe use after the change. While waiting for the medical device maker to implement and test the changes, the vulnerability was exploited, resulting in the entire hospital network being shut down.

Another example, a hospital that introduced a new application on its network detected intermittent problems that began to occur with other networked medical equipment that had previously been working fine. It was ultimately discovered that the new application was sending large amounts of data over the network identified as voice data. This data got a high priority on the network, allowing fast data transmission times and quick response by the application, but it completely utilized the capacity of the network, causing the other networked medical equipment to intermittently be unable to communicate.

As a clinical engineer, I have witnessed many examples of medical equipment failures due to networking problems. One incident was a wireless telemetry system that was dropping connections with patients. After validating that all of the equipment was operational in accordance with manufacturer standards, we started to analyze the network the data was transmitting on. After working with our IT department, we found that an update to the firmware of the wireless access points was causing our problems. The manufacturer had approved the update, and our IT department had no idea that any issues had begun because of the update.

Another example was an MRI machine that was inoperable due to noise in the scans. This was not only affecting hospital operations, it was also affecting patient care, as patients who required an MRI scan had to be transported to another facility. After an investigation, we discovered a new radio station had begun broadcasting locally and the inadequate shielding in the room was allowing electromagnetic interference, or EMI, to affect the MRI system. Solving the problem was easy, but we wanted to know how we could have prevented the incident. After speaking with engineers at the radio station, we were told that they submitted the documentation informing our facility of the upcoming changes. However—probably because no one understood the far-reaching effects of this newer technology—the clinical engineering department was not made aware of this information.

Several standards exist for wireless technologies. The Institute of Electrical and Electronics Engineers, or IEEE, has created the 802.11 standard for wireless local area network equipment. This is the most common networking type found in medical facilities. However, the 802.11 standard does not address certain health care aspects such as security and reliability. The Health Insurance Portability and Accountability Act (HIPAA), created by the US Department of Health and Human Services, does require medical facilities to create safeguards for technical security measures that guard against unauthorized access to patient information transmitted over an electronic network. The National Fire Protection Agency’s Standard for Health Care Facilities (NFPA 99) has defined standards for medical equipment repair, maintenance, and safety compliance, but does not specifically address new wireless technology.

In 2006, the International Electrotechnical Commission, or IEC, and the International Organization for Standardization, or ISO, determined there was a need to address new problems that might emerge when medical devices are connected to a wireless network. They began drafting a new standard to define process requirements in 2006 and recently completed the final draft, IEC 80001-1:2010. Eagles8 describes the purpose of IEC 80001-1:2010 as applying risk management to IT networks incorporating medical devices by addressing the key properties of safety, effectiveness, and data/system security, which are considered necessary to maintain patient well-being.

Gladman and Lapinsky9 recognize that the increased use of cellular phones and ever-changing communication technologies require ongoing vigilance by health care device manufacturers, hospitals, and device users, to prevent potentially hazardous events due to EMI.

Gladman and Lapinsky also state that the rapid development of new wireless telecommunication technologies makes much of the current literature obsolete, and information technologists and clinical engineers must determine the impact on existing hospital network infrastructure and medical devices. This is much easier said than done. Many facilities nationwide realize the complexities of both information technology and clinical engineering and have contracted these services to third-party organizations. This separation creates miscommunication and an increased opportunity for problems.

The IEC 80001-1:2010 standard is a preemptive measure to help alleviate potential problems caused by the rapid advancement of wireless medical technology. For health care organizations to continue providing quality patient care as efficiently as possible, they should begin the process of transitioning to this new standard as soon as possible.

Michael Shouppe, MS, BS, CBET, is a clinical engineer and an associate professor at Pensacola State College in the EET/biomed program. For more information, contact .