The radiation force balance principle is widely used for testing power output levels of transducers. We present a step-by-step guide to the American Institute of Ultrasound in Medicine’s recommended method for ensuring the reliability of your ultrasound probes.

A widely used method to test average power-output levels of therapeutic and diagnostic transducers is the radiation force balance (RFB) principle. The American Institute of Ultrasound in Medicine states that the radiation force balance was chosen for measurement of ultrasound power because it is conceptually simple, relatively easy to build and use, and provides a measurement which can be referred to NIST [National Institute of Standards and Technology].

Several US companies manufacture commercial ultrasound power meters (UPMs) that utilize the RFB principle. In this article the basic details are described. Other RFB devices may vary in construction, usage, and calibration procedures.

This method is called RFB because the applied sonic force radiated from the transducer-under-test (TUT) exerts a force proportional to the radiated sonic energy when it is intercepted by the target. This force is measured on a mechanical or electronic scale. The ultrasound power output in watts equals the radiation force in grams times the velocity of ultrasound in water (for example, a power of 10 W corresponds to 0.68 g).

The Test Tank
A suitable test tank should have large enough water volume and solid mechanical construction to allow accurate power measurement. A test-tank volume of 1 L was found to be adequate. A 0.5 L capacity cannot support the sonic forces at high power levels; and heat gradients, cavitation, or reverberation may cause unstable readings.

Sonic Sound Absorbers
The purpose of the liner in the test tank is to absorb sonic energy. The effectiveness of the absorption is rated by the material’s ability to dissipate radiation and is measured in percent called reflection coefficient, which is the ratio of the amplitude of a wave reflected from a surface to the amplitude of the incident wave. Many different materials can be used to absorb sonic forces. Most of them are synthetic rubber, such as neoprene. Some materials use glass air bubble beads with various levels of different absorbing media to enhance the sonic absorption and diffusion.

Degassed Water
Most ultrasound standards specify water as the test media, since water approximates soft body tissues and fluids in propagation velocity and can be readily distilled, filtered, or degassed. Removal of some of the oxygen—preferably around 5 ppm—is necessary for accurate measurements. Small air bubbles cause secondary reflections and attenuation of beam radiation force, which causes lower power readings. There are several ways to obtain degassed water:

• Boil tap or distilled water for 10 to 20 minutes in a mason jar without the lid (suggested volume is a few liters). Cover the opening with plastic wrap and refrigerate. Transfer (or siphon for minimum turbulence) to a 1-L CO2-type plastic bottle used for carbonated beverages. The test tank for the UPM requires close to 1 L of water, so this bottle size is preferred for one-time usage. To avoid oxygen buildup, refill the bottle when storing.

• In a hospital, obtain sterile distilled water from central supply and transfer it to a 1-L CO2-type plastic bottle. Avoid using PVC or polyethylene containers, as over time they will absorb oxygen.

• Pull vacuum: Suction units provide adequate degassing. A rubber lid seal connection is made between the vacuum source and the test tank or mason jar.

Sonic Target
All of the energy radiated from the TUT should intercept the 45° cone. A cone target, similar to the one used by NIST, is milled from a 31/8-inch diameter solid aluminum rod to an 80-mill wall thickness. The cone is sealed watertight, with the inside containing either air or polystyrene foam. There are also absorbing-type targets covered with rubber, but the most commonly used are the reflective cones.

Coupling Target to Scale
The sonic force exerted on the cone is transferred to a sensitive balance. Any coupling method can be used as long as it does not degrade the accuracy of measurement.

TUT
The TUT’s positioning and the radiated force path are shown in Figure 1. The distance between TUT and the cone target should be kept to several wavelengths, approximately 1/2 inch (at 1 MHz, wavelength is 1.54 mm).

Measuring Force Exerted on Target
To measure to the nearest 100 mW, scale sensitivity better than 0.01 g is required. The gram readings are converted by the scale to read out directly in watts. A power of 1 mW equals 68 µg.

Power Measurement Procedure for UPMs
It is important to select a test location free of vibrations and air currents (manila folders can be used to reduce air turbulence). The UPM must be either placed on a level surface, or leveled by using leveling knobs, if provided. Next, tilt the test tank and pour the degassed water, with minimum turbulence, to approximately 1/2 inch from the top of the tank. Then place the cone target into the tank. (Make sure that the cone is uniformly wetted.) Position the TUT approximately 1/2 inch above the center of the cone and tilt it at 45° into the water. (Make sure that the TUT surface is uniformly wetted.) Allow a few minutes stabilization, then turn the power on, zero the balance, and verify that the zero reading is stable. In this example, place the 1-g weight on the RFB assembly; it should read 14.65 W. Turn on TUT power and take an average of three readings.

To reduce air absorption, cover the tank top between uses with cardboard or other material.

Other Power Measurement Hints
• Time duration of power measurements, particularly over 10 W, should be kept short.

• Before new measurements, inspect for bubble formation on the target and on the rubber absorber surface. Wipe off bubbles with a paper towel, tissue, or cotton swabs.

• Keep TUT in the horizontal plane; tilting more than 30° will produce standing waves as some of the energy bounces back from the water surface, increasing apparent power output.

• The electromagnetic restoring force of the scale may be affected by media, such as heavy current power lines or instruments, generating strong magnetic fields.

• The power output on therapeutic units tends to vary during warm up. Turn on the unit with no power output for a few minutes to allow warm up before testing.

FDA Ultrasound Power Emission Accuracy
The US Food and Drug Administration’s “Radiation Control for Health and Safety Act" specifies that the temporal average ultrasonic power be indicated on each therapy unit within ±20% for all emissions greater than 10% of the maximum emission. A commonly used calibration point is 10 W, with ±2 W maximum allowable deviation. The measurement accuracy of the power meter is to be three to four times better, or ±5%. Most power meters can meet these requirements.

The higher the density, the more force is required to propagate. Compressibility (fractional decrease in volume when sonic pressure is applied) also affects the speed of ultrasound. The velocity changes with temperature: at 20°C, it is 1,480 m/sec in water, but at 37°C, it increases to 1,570 m/sec. The highest density for water is at 3.98°C (0.999 g/cm3) and the lowest is at boiling (approximately 100°C) where it is reduced to (0.958 g/cm3). Therefore, it is best to use degassed water at ambient temperature rather than refrigerated temperatures. The few tenths of a watt power output variations are usually negligible and corrections can be made.

Denes Roveti is the technical director of OHMIC Instruments Co. 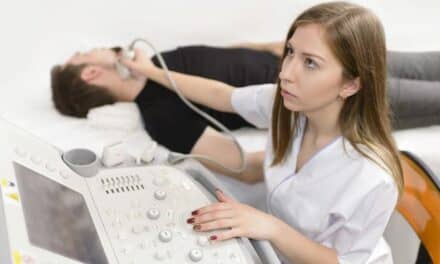