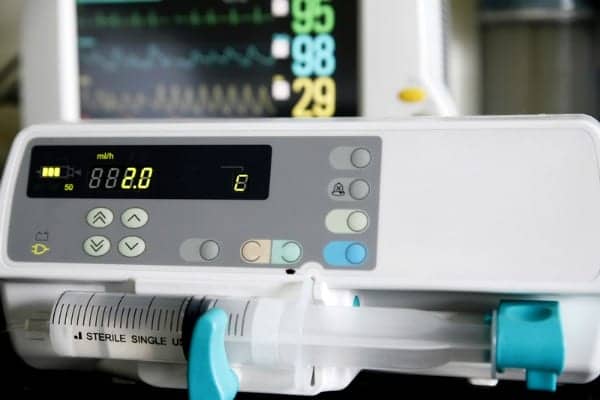 Every year since 2010, the Association for the Advancement of Medical Instrumentation (AAMI) has joined forces with the FDA to hold a “summit” exploring a medical technology or device-related issue. Last year, you may recall, the popular event covered risk management, while in 2014 the discussions focused on ventilators. But seven years back, at that very first meeting, the topic for the weekend was infusion pumps.

Marilyn Neder Flack, who is now executive director of the AAMI Foundation, AAMI’s offshoot charitable and educational organization, was not with the association in 2010, but she does have a sense of what happened at that summit. “All of these problems were listed,” says Flack, “and everyone figured out who should address what—that the doctors should do this, the manufacturers should do that, the HTM people take this,” and so on. “And then somebody suggested we have a neutral convener who would oversee everything. They wanted to make sure that no single group owned the whole project.”

Almost immediately, says Flack, who is also AAMI’s senior vice president of patient safety initiatives, it was decided that the AAMI Foundation would serve as this neutral body—and not only for efforts related to infusion pumps, but for future summit-related initiatives as well. The foundation created a group that included representatives from across the industry and named it the “AAMI Foundation Infusion Steering Committee.” The committees’s goal: Get to work right away on 13 “priority issues” that mostly had to do with the “increasing complexity of infusion devices.”

A report AAMI published soon after the summit laid out these issues one by one: The system that was in place for reporting adverse infusion events wasn’t adequate to the task. Infusion devices were largely incompatible with health care information systems and drug libraries. There were too many use errors causing “adverse drug events” that in some cases may have been prevented with better pump design and more-effective training.

Other issues included difficulties associated with “uploading, managing, and maintaining drug libraries;”problems related to “infusion line management…reflecting the complexity of multiple infusions;” and the “high numbers of false alarms” put out by these devices.

Infusion pumps, the report noted, are “one of the most widely used medical technologies in health care,” and “computer-controlled smart pumps can be programmed to deliver controlled amounts of painkillers, antibiotics, insulin, chemotherapy drugs, nutrients, or other fluids.” But if they don’t work as intended, or if a pump user makes a simple mistake, the consequences can be severe. Between 2005 and 2009, there were more than 700 deaths and 56,000 adverse events associated with infusion devices, the report continued—“more than for any other medical technology.”

It’s fair to say that since that summit wrapped up, infusion pumps and all-around pump safety have both come a long way. A recent search of the FDA’s medical devices Web site shows no recent adverse advents related to infusion pumps, and pump recalls are now relatively rare.

Flack, who joined the AAMI Foundation in 2013 and went on to help create its National Coalition for Infusion Therapy Safety, a “think tank” of industry players, clinicians, researchers, pharmacists, professional societies, and regulators, credits the progress to two improvements in particular: First, more hospitals are purchasing and using smart pumps. And second, clinicians are doing a better job of following the protocols associated with their various smart pump drug libraries. “Because a ‘smart’ pump is only as smart as the features that you use,” she says.

With that in mind, Flack adds, the coalition’s biggest goal is “to get people to use the embedded safety features in smart pumps around the amount and types of drugs that are delivered to their patients.” The group has undertaken several projects to further its agenda, but the one that Flack is most excited about at the moment involves the publication of four “quick guides” on smart pump safety it will post on its Web site later this fall.

One of those guides will cover the management of pump alarm signals. A second will discuss improving drug library compliance. The third will cover the use of multiple lines, and the fourth, Flack says, will be geared toward hospital executives. “It’s five questions the C-suite should be asking” to determine how far along their hospital is in infusion therapy safety. “The plan is to have everything online as soon as possible,” she says. “And it will all be available for free.”

AAMI, of course, isn’t the only organization concerned about smart pumps. At the ECRI Institute, for example, there’s an ex-clinical engineer working full time on pump safety improvements. Juuso Leinonen, a project engineer in ECRI’s Health Devices Group, was previously responsible for infusion pump maintenance, repair, and performance verification at St. George’s Hospital in London. Now, he says, he’s “up to his elbows” doing model-specific evaluations of infusion equipment, and pinpointing problems for the industry to address.

“The incorrect administration of medications to patients probably remains the biggest issue,” Leinonen says. “And it’s usually due to the same recurring reasons,” from incorrect pump set-up or pump programming, to clinicians not following best practices, “all the way down to pump failures in some cases.”

Manufacturers, Leinonen notes, continue to tackle use-related problems through improvements to pump design and their associated workflows. He highlights dose-error reduction systems as perhaps the biggest development in this regard, but also points to things like increased pump integration with electronic health record systems and “big data”-type improvements such as infusion therapy quality analytics, “where you can look into the data on a group of pumps to see how they’re being utilized in your facility and get an idea whether they’re being used safely.”

And then there’s the fact that almost every pump interface now includes prompts to guide users through the programming process. “Especially if you don’t have a lot of experience with smart pumps, that information can be very helpful,” Leinonen says.

Biomeds and other HTM professionals can do their part to improve smart pump utilization and safety first by ensuring that their pumps are maintained correctly, Leinonen says. “It’s especially important to pay attention to cleaning. If you don’t follow the manufacturer’s instructions, even if it doesn’t result in patient harm it could lead to broken parts that cost a lot to replace.”

It’s also critical for HTM departments to get involved in the smart pump procurement process. “When you’re assessing new manufacturers and the pumps your facility might purchase next, you should ask a lot of questions: ‘Can you repair that pump in-house, or will you need to send it off?’ ‘Have other facilities reported certain failures with this model?’”

ECRI, for instance, offers a service called Biomedical Benchmark that makes conducting such research relatively easy. “It lets you compare the number of repairs that are reported by other hospitals”—and how much time they’re spending handling those repairs,” explains Leinonen’s colleague Erin Sparnon, engineering manager in ECRI’s Health Devices Group. “It’s the kind of information that can save your department a lot of trouble down the road.”

Another outfit in the business of saving trouble for HTM departments is Everett, Wash.-based Fluke Biomedical, maker of a line of infusion device analyzers that can accurately and reliably test multiple pumps simultaneously. Shirin Khanna, the company’s senior marketing manager for infusion pumps, electrosurgical, and electrical safety, says their signature product—the IDA-5—can check flow and other parameters on four infusion pumps at once. “

Pumps are one of the highest-stocked devices” in most modern hospitals, she notes, “and so BMETs spend a lot of their time doing preventive maintenance on them.” Fluke’s analyzers, she says, are designed with the needs of these technicians in mind. “We want to make their lives easier.”

Toward that end, Khanna says, the IDA-5 offers real-time test results, electronic data collection and archival, an automated documentation program designed to facilitate regulatory compliance, and the flexibility of customizable testing across a variety of infusion pump brands.

“You can create custom test templates corresponding to any infusion pump,” Khanna says. “Automation makes testing and documentation easy so you don’t have to carry the service manuals of every pump you work on around the hospital with you. All of those procedures are already onboard.” Plus, it cuts the total time it takes to perform preventative maintenance considerably, she says.

Fluke also offers a streamlined version of its analyzer solution called the IDA-1S, Khanna says. “It’s more targeted to those professionals who are on the go—who might travel between facilities or may not want to do all of their testing in the shop, and who instead need something that’s quick and portable that they can bring from room to room. It’s very light, easy to carry around, and it’s battery operated so you don’t need to find an outlet.”

The device is set up to test one pump at a time, she notes, “but it has the same technology, accuracy, and reliability,” as the IDA-5. Both products, Khanna adds, come with remote-control software that allows technicians to hook them up to a test station and have a computer run the entire testing process. “If you put four IDA-5s next to each other,” for example, “you can automate the analysis to test 16 pumps at once.”

And for those facilities that could use an even simpler solution when it comes to the challenges of pump maintenance and repair? According to Gurmit Bhatia, president and CEO of US Med-Equip, “that’s where pump rentals make the most sense.”

Houston-based US Med-Equip, like other rental companies across the country, offers a range of infusion devices to its customers, as well as covers all service needs on the rental equipment. “All of our rentals work the same way,” Bhatia notes. “When it’s time for a PM or if something needs repair, you send the pump back to us and we take care of it.”

US Med-Equip Biomed Production Manager Rene Torres notes that while the pump is in the shop, it’s typically subjected to a thorough parts check and error-codes scan before it’s then run through the standard preventive maintenance process, which is likewise a relatively routine affair. Among other things, they’ll clear out the pump’s existing drug library and delete any private patient information, as well as install any required software updates if the device is scheduled to be delivered to a new facility (and not returned to the place that sent it in). They will also verify that the installed software matches that found on other pumps at the new facility.

And finally, Torres says, they’ll ensure the pump is loaded with the right wireless protocols to permit seamless connection to a facility’s wireless network.

In the end, says Steve DuMenil, US Med-Equip’s director of risk management, the way they handle their infusion pumps is guided by a philosophy that puts patients first. “Safety is always our No.1 concern—it has to be when you’re dealing with devices like these.” His recommendation to any HTM professional who has responsibility for infusion pump management: Make patient safety your priority.

“I know it can be tough when you’re working across departments. When trying to balance the interests of biomed and IT, your clinicians, and hospital leadership, there’s going to be some butting of heads.” But, DuMenil says, “The more you collaborate, and the more you keep in mind that it is all about the patient, the easier it will be for everyone involved.”

Marilyn Neder Flack of AAMI agrees: “I really think that infusion pump safety, and that complex process of drug delivery to the patient, depends on the work of a multidisciplinary team in the hospital,” she says. That team, Flack adds, has to contain competent clinicians, and it has to include management that puts safety above all else. “But it also must include biomedical technicians who understand these pumps inside and out.” And, she says, the industry must continually strive to improve the usability of the pumps. which will go a long way in reducing use issues. 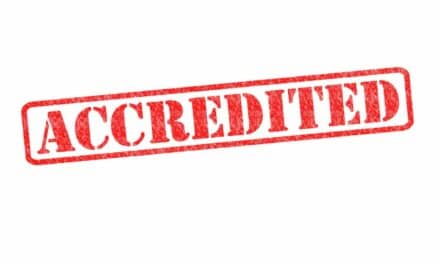 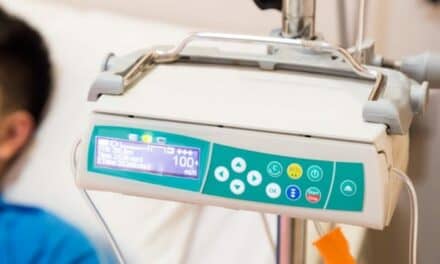