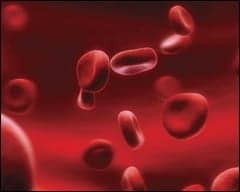 Blood is a highly specialized circulating tissue consisting of several types of cells suspended in a fluid, called plasma. The components of blood are: red blood cells (erythrocytes), which carry respiratory gasses and give it its red color; white blood cells (leukocytes), which fight disease; and platelets (thrombocytes), which are cell fragments that play an important part in the clotting of blood.

The average adult, in good health, has more than 5 quarts (4.75 liters) of blood, or 8.5% to 9.0% of his or her body weight, that is composed of two main components: plasma, (55%) and formed components (45%). The blood transports oxygen, nutrition, hormones, and antibodies to the body cells and carries waste products away from the cells back to the excretory system for disposal. The blood also helps to regulate the body’s temperature.

There are four types of blood: A, B, O, and AB; O is the most common. On the surface of the red cells (erythrocytes), there are at least eight different types of antigens called an Rh factor. If at least one antigen is present, the blood is considered “positive.” If none are present, the blood is considered “negative.” Mixing the blood during a transfusion can lead to clots, immune reactions, and other conditions. As a piece of trivia (that only a biomed would appreciate), the Rh factor was named after the Rhesus monkeys used in the research.

Plasma consists of about 92% water; 7% proteins; and 1% inorganic salts, organic substances, dissolved gases, hormones, antibodies, and enzymes. Some of the specialized proteins in plasma include serum albumin for nutrition, fibrinogen for clotting—both are generated in the liver—and globulins.

The globulins include three main components. Alpha and beta aid in the transporting of nutrition and are involved with clotting. The last globulin is gamma globulin, which are immunoglobulin or antibodies and are part of the body’s immune system.

Blood cells and platelets compose about 45% of the blood volume. The red cells, or erythrocytes, comprise the most cells, about 35 trillion in a normal person. The combined surface area of the red cells is about the size of a football field. The large surface area is needed to allow for the transfer of oxygen as the blood flows rapidly past the cells. Hemoglobin, which is the major component of the red cells, is composed of heme, an iron containing prosthetic, and the protein globin. These cells can absorb 60 times the oxygen that plasma can, and the absorbed oxygen is what gives the cells their red color. Please note that carbon monoxide can also give the red cells a very red color and will sometimes confuse the clinical staff. Red cells are generated in bone marrow and live for up to 120 days; about 180 million cells are created and destroyed every minute. Iron from the dying cells is transported by plasma back to the bone marrow for reuse. Surplus red cells are stored in the spleen for release during emergencies, such as a hemorrhage. The amount of red blood cells is different for the adult male and female. The adult male has between 4.7 and 6.1 million cells per microliter. The adult female has between 4.2 and 5.4 million cells per microliter.

The white cells (leukocytes) are actually colorless, much larger, fewer in number than red cells, and can move about under their own power. Leukocytes that originate in both the bone marrow and lymph tissue are divided into six subgroups. White cells actively seek out and destroy microorganisms that enter the body, increasing or decreasing as the number of microorganisms changes. When a white cell consumes a microorganism, the white cell dies. White cells have a short life. There are between 4,500 and 10,000 white cells per microliter.

Platelets (thrombocytes), are small, less than a third of the size of a red blood cell; clear; generally disk-shaped; and initiate clotting when a leak in a vessel occurs. They are formed in the bone marrow and live for about 10 days.

The tubes have color-coded tops that help the lab route the samples to the correct testing stations. Please be aware that the colors can vary from hospital to hospital. Some of the more common tops are:

The vast majority of blood samples drawn are of venous blood, because the veins are much easier to access and much less painful to “stick” than an artery. The number of samples to be drawn is determined by the physician’s order for that patient or the hospital protocol for treatment of the patient’s illness or condition. Arterial blood is required for tests when blood oxygen levels are critical. Most arterial blood samples are drawn from patients that are on a direct blood pressure monitor. Sometimes, when the sample is not drawn properly, the pressure waveform will change. This is generally due to a clot or air bubble in the line. Proper flushing techniques are needed after the arterial blood is drawn.

When the samples get to the lab, in most hospitals, they are processed quickly using semi or fully automatic instruments. Most of these instruments will perform a series of tests on the same sample with few human interventions. Some tests may require splitting samples and having those samples tested by individual machines.

A typical order for lab tests includes a CHEM-8 test, sometimes referred to as the basic metabolic profile, or BMP. This is a series of blood chemistry tests that include the following: four electrolytes—sodium, potassium, chloride, and ionized calcium—as well as blood urea nitrogen, total CO2, creatinine, and glucose. These results will provide the physician with a profile of the patient’s general condition. A lipid panel will indicate cholesterol levels, both good cholesterol (HDL) and bad cholesterol (LDL).

Other typical tests include CPK, which measures creatine phosphokinase, or CPK, an enzyme found predominantly in the heart, brain, and skeletal muscle. When the total CPK level is substantially elevated, it usually indicates injury or stress to one or more of these areas. Another is a CBC, or complete blood cell count, along with more than 70 other tests that can be done on most of the new instruments. All therapeutic drug levels, such as digoxin, valproic acid, dilantin, and many others, are easily measured on various instruments.

David Harrington, PhD, is director of staff development and training at Technology in Medicine (TiM), Holliston, Mass, and is a member of  24×7’s editorial advisory board. Contributing to this article is Freeman (Skip) Sands, regional manager for TiM. For more information, contact .