Michael Fraai, director of biomedical engineering at the 720-bed Brigham & Women’s Hospital, a Partners HealthCare System Inc teaching facility in Boston, did his homework and, in 2004, began a program to track commonly misplaced equipment. The hospital’s capital expenditures were high, he explains, because it had to keep buying duplicate telemetry transmitters, external pacers, 12-lead cables, defibrillators, and portable monitors—among other things—in addition to its routine capital expenditures for patient-care equipment. Also, he reports, clinicians were reporting that having to search for equipment was, as he put it, “negatively affecting their quality of work life.”

Wi-Fi is the technology that allows you to use your BlackBerry or your laptop wherever there is coverage.

The solution he settled on was an indoor positioning solution (IPS), the generic technical name for electronic asset tracking and the buzzword version in common use today. Fraai chose a system developed by Lawrence, Mass-based Radianse and installed it in seven cardiac care units, two surgical intensive care units, six operating rooms, and their connecting common areas. It was also installed for portal coverage in the radiology department and catheter lab as well—all for a pilot study of the benefits of the system.

The stated goal: Reduce costs by preventing equipment losses, reducing rentals, ensuring that the right equipment is available when it is needed, and, Fraai says, “impacting the quality of work life for our clinicians.” The installed system tracks about 200 devices. Other equipment commonly tracked using IPS includes infusion pumps, pulse oximeters, ventilators, monitoring modules, transport equipment, and even beds and wheelchairs.

Compatible Solutions
Brigham & Women’s chose wireless fidelity (Wi-Fi), a version of radio frequency identification (RFID) that was “compatible with its mission-critical wireless applications and plans for future use of the wireless bandwidth,” Fraai says. The system, he explains, “is analogous to a global positioning system in a car.” Wi-Fi is the technology that allows you to use your BlackBerry or your laptop wherever there is coverage.

Fraai says his facility chose the solution it did because it could connect receivers directly to the facility’s existing network without any interference from or to other wireless systems in place there—an important factor in deciding what type of IPS technology to adopt.

Robert L. Moorey, MBA, CRES, CBET, director, technical and strategic development of clinical technology services, at ARAMARK Healthcare, Charlotte, NC, describes RFID as “any device that operates in the radio-frequency band to track or manage an asset.” Wi-Fi, in his definition, is “a subset of RFID because it operates as part of that radio-frequency band. It is commonly used for information-technology communication and utilizes the Wi-Fi frequencies to communicate between the locater tags attached to the devices and the Wi-Fi access point. The data are then passed along the network via physical cables.” RFID technology uses “small bursts of radio waves to automatically identify itself to a device. All communication is done from a distance via radio waves.”

Additionally, notes Mike McGuinness, CEO and president of PanGo Networks, Framingham, Mass, “There are two forms of RFID: Passive, which is typically used in the manufacturing supply chain to identify and track high-volume consumables, and active, which is best suited for real-time, high-value asset tracking. In passive RFID, the locater tag uses power from the field created by the reader to power a microchip embedded in it. The chip modulates the radio-frequency waves, converting them into digital data. Active RFID includes a battery-powered tag that does not require the energy of the reader. Active tags can be programmed to communicate with readers on varying time intervals, allowing for near real-time locating over large areas.”

Wi-Fi, he adds, “is a term coined by the Wireless Ethernet Compatibility Alliance to describe the Institute of Electrical and Electronics Engineers’ 802.11 wireless standard for local-access networks. Leveraging a wireless network and its access points as ‘readers’ for active RFID is rapidly emerging as a reliable and cost-effective way to deliver enterprise-asset visibility solutions. By developing products that support the Wi-Fi standard, a Wi-Fi RFID tag or other Wi-Fi device can communicate with any brand of access point or client hardware that is built to the Wi-Fi standard.”

Weighing Your Options
Wi-Fi’s common use in hospital information technology (IT) systems “has encouraged many hospitals to explore the option of Wi-Fi tracking,” notes Linda Chan, an analyst at ECRI, a not-for-profit health services research agency based in Plymouth Meeting, Pa. “If the tracking system uses a Wi-Fi infrastructure that a hospital already has in place for other applications, the hospital can avoid installing proprietary readers just for reading tags and may, therefore, be able to reduce some of the associated hardware costs.” But, she cautions, “One problem with Wi-Fi is the technology is not geared specifically toward locating, so, depending on the vendor used and the overall design of the Wi-Fi network, the system’s performance may be compromised. Also, ECRI has seen that the battery life for Wi-Fi-locating tags tends to be shorter than that of some other RFID technologies. Some Wi-Fi tags have a battery life of just a couple days when tracking mobile assets. A hospital tracking a large amount of equipment could thus add a substantial amount to the ongoing cost of the system due to frequent battery replacement.”

Also, adds Jim Keller, ECRI’s vice president for health technology evaluation and safety, a hospital with a Wi-Fi infrastructure already in place still must make sure that infrastructure can handle multiple applications. “Your IT department needs to assess the system’s ability to handle another application added on top of existing applications,” he explains. That determination, he points out, will depend on what the hospital already has in place and what applications are using Wi-Fi to start with—in other words, how much bandwidth is being used. The wireless coverage in tracking areas is also important.

Initial results from the completed pilot at Fraai’s institution, which lasted 6 months, were, he says, “promising. The technology worked, customers seem satisfied, and application use seems consistent. We were able to see loss reduction of 70% and 100%, respectively, with two of the assets we tracked.” That improvement, he stresses, “has to be coupled with thorough analysis of existing use models and potential changes to those models now that we have concrete data.” A report on the Brigham & Women’s project from Radianse notes that IPS “can have a dramatic impact on savings and a fast return on investment (ROI).” Electronic asset tracking can help a hospital avoid considerable costs when applied to lost assets, excessive equipment rentals, surgical-instrument management, and improved equipment utilization, the report adds.

In fact, reducing delays in patient care by using the IPS to find the right equipment can actually increase revenue. Solid returns related to workflow analysis also may exist, Fraai points out, although that ROI may be more challenging because of changes required to established processes and culture. Fraai says his organization used both approaches in presenting the chosen solution to the board, “but ended up focusing on hard ROI numbers, which can be directly tied to cost prevention.

Offering both arguments—and looking at both soft and hard ROIs—when deciding to implement an IPS technology solution is a good strategy, ECRI’s Chan adds, because a hard ROI argument alone may be difficult to defend. “There’s a lot of information about favorable ROI,” she says, “but much of the information is from tracking vendors.” And, Keller points out, “asset tracking using technologies like RFID is still very new. As such, independent published research on ROI for that type of asset tracking is quite limited.” So, he stresses, “it will be hard for hospitals to use a hard ROI analysis by itself to justify the cost of implementing the technology. Other factors may also need to be considered, like the threat of another facility nearby using an IPS, which can give it a competitive edge and bragging rights to the latest ‘patient-safety technology.’ Or the hospital may have a significant problem with equipment management that other measures have not solved. Implementing IPS technology may be the next logical step.”

IPS Makes Sense
Measures that didn’t work are a common lead-in to adoption of an IPS. Some might view such a high-tech solution as a luxury that financially hard-pressed hospitals cannot afford. But those in the trenches say it may be impossible to accomplish the same thing through better staff training in equipment-management policies and procedures, more aggressive monitoring of staff compliance, and stricter enforcement of the penalties for violating them.

“We tried,” Fraai says. “But with a manual system, you’re only going to get so much improvement. Now, instead of requiring supervisors to track down misplaced equipment, we have the tracking system to tell us where things went with the exact date and time.” Although electronic asset tracking compensates for human oversight, it does not replace it entirely. “Even with the tracking system in place, you need to make sure you have accountability processes in place, too,” he advises.

“I think electronic asset tracking is too new to really answer the question of whether hospital biomedical engineering departments could accomplish the same tracking using traditional methods,” Keller says. “Conceptually, it’s a really good option. You’re in pretty good shape if you know where that equipment is through asset tracking,” he notes, reminding biomedical engineering departments to make sure that careful monitoring for hazards and recalls is part of the protocol for managing asset-tracking data.

Assuming, that is, that the system is working like it should. A system designed to help hospitals get a better grip on the location and use of sensitive equipment will not do anybody any good if it is turned off or otherwise disabled. Also, couldn’t a technology designed to help staffers keep things in certain places cramp the style of a provider who really needs it somewhere outside its bounds?

Neither should be a problem with electronic asset tracking. “A good system has a tamper-proof tag that alarms when it is removed from the facility,” Moorey notes. “It should be able to restrict access based on need. The facility would assign a ‘super-user’ who has full access to the system and who can make necessary changes to help maintain integrity and limit anyone from disabling it for unnecessary purposes.”

At his facility, Fraai reports, equipment is assigned to zones. When someone tries to take something outside its zone, the alarm sounds or a message is sent, and the person who gets the alarm or message will determine the level of the emergency and the response. In an emergency, he adds, even that function can be disabled by an administrator.

Just be sure you are ready for it if you get your Wi-Fi or RFID solution. Barb Taylor, services product manager at Philips Medical Systems (Bothell, Wash) notes that, “The real win with an asset-tracking solution is dependent on the size of the problem and the commitment of the staff. Before you institute one, you must clearly understand what your problems are, scope the technology solution accordingly and, most importantly, be prepared to define and implement the necessary changes. With that kind of commitment, solutions and results far greater than simply locating an IV pump can be realized.” 24×7

Log onto 24x7mag.com to read more about asset tracking in our October 2005 issue.
Russell A. Jackson is a contributing writer for 24×7.

Mergers and Acquisitions in Radiology: 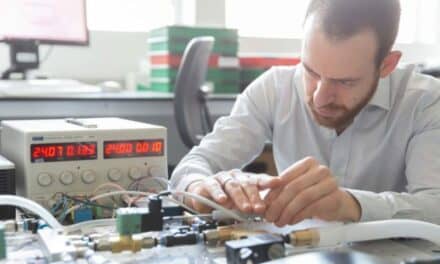