Nothin’ could be finer…

In just a few short weeks many of us will be on our way to the Radiological Society of North America (RSNA) conference and/or the North Carolina Biomedical Association (NCBA) meeting. This year, the two shows occur simultaneously, with RSNA – the mother of all things medical imaging – again honoring its roots in Chicago, Dec. 1-5. NCBA, meanwhile, returns for a third consecutive year to the Pinehurst Resort outside of Raleigh, N.C., Dec. 2-4.

NCBA may not boast the history or the intensity of RSNA, yet the symposium has its own attractions, designed to benefit technical service and support personnel. For while RSNA showcases the latest and largest medical imaging technology and equipment, NCBA helps biomedical equipment technicians keep abreast of the means and the skills necessary to keep that technology and equipment in optimum working order.

At the same time, the association’s symposium has a pretty impressive track record of its own: 2002 marks the 24th annual, an event as old as the NCBA itself, according to NCBA president Boyd Campbell, CBET, CRES. A handful of North Carolina biomeds attended the first-ever symposium – a one-day gathering in a small conference center, started to promote education for biomeds.

As president, Campbell is charged with making sure the symposium happens. It’s a responsibility for which he is well-qualified: As president in 1991, he organized that year’s conference as well.

“It was a whole different world then. We were in a small hotel then that has since been condemned and burned down,” Campbell recalled, laughing.

“We have always tried to keep up with the times,” he continued, trying to remember that meeting 11 years ago. “But the focus has never changed from what was originally set up 24 years ago, even though the people have, and I think that’s what’s kept us successful over the years. We’ve always been very educational-oriented, tried to keep up with the times, with the current technologies.”

The NCBA symposium has always served the biomeds’ interests, expanding from one day to two (it was two Campbell’s first time around in 1991) to its current three-day schedule, a couple of courses at a time.

(“NCBA 2002” beginning on p. 36 will whet your appetite for this year’s activities. And a chance to play golf on a championship course doesn’t hurt, either.)

As NCBA prepares for its 25th year, the association plans some additional celebrations. After all, it isn’t every day that an organization observes its silver anniversary.

“We don’t do a lot of grand and glorious stuff,” Campbell says modestly. “We found what works well for us, what the membership wants, and we’ve kind of stuck with that and that’s what’s kept us successful over the years. What we try to do well is use our resources for the education of the people.”

I’m one of those people who is heading to North Carolina for some education. See you at NCBA!

24×7 is extending the deadline to Nov. 25 for responses to the “Pulse Check: Compensation Patterns” to give more readers the chance to send in their information. The story is slated to run in the January 2003 issue. 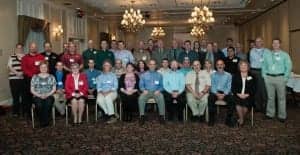