It is no surprise that Demetrius Dillard’s interest in the field of health care technology management was born from a conversation he had with a working biomedical equipment technician (BMET). Years ago, when Dillard’s mother was hospitalized, a biomed at the facility came to the room to fix a pump, which was consistently setting off alarms improperly. Dillard, interested in the biomed’s training and duties, began speaking with him, which sparked the intrigue and passion of the most recent winner of the Association for the Advancement of Medical Instrumentation (AAMI) and GE Healthcare BMET of the Year Award.

The Start of a Career

Speak with anyone who has worked with Dillard or knows him professionally, and shortly into the conversation his ability to connect and talk with people will come up. Though he possesses all of the technical skills that make a great BMET, his interpersonal skills are what set him apart from similar biomeds.

“He is an amazing, well-rounded technician,” says Barbara Christe, associate professor and program director, biomedical engineering technology, Indiana University Purdue University Indianapolis (IUPUI), Indianapolis. “I think he’s really forging new ground because he is connected not to facilities and not to clinical engineering but the chief information officer. I think that inroads into the C-suite are really transformative. It shows, I think, a glimpse of the future of clinical support for equipment. I think that we’re going to be much more integrated into information technology in the future, and I think that Demetrius is showing us where we’re going to go. That’s the piece that’s so nifty.”

When Dillard first entered a BMET program more than 8 years ago, he was slightly adrift professionally. After struggling with his previous profession, he elected to return to school for mechanical engineering. However, after speaking with the aforementioned biomed, he chose to focus his education on clinical engineering. Still, it took until he entered the workplace during his work-study program that his love and passion for health care technology management took off.

“As I began to do my work-study at Wishard [Health Service, Indianapolis] and work more with Barbara [Christe], it started to show that the biomed field was actually a field, and that individuals embraced the field and the learning environment that betters you, your employer, and the end users,” says Dillard, BS, CBET, equipment interface specialist III, Community Health Network in Indianapolis. “For me, seeing that so early on was huge. It allowed me to become motivated on a whole different level. When they added the bachelor’s degree program, that actually sparked my interest further. My motivation went from a 10 to a 20 because I was able to see that there was a road for me into management where I could sell that message, getting more people involved in that noble mission that every clinical engineer and biomed takes a part in. That’s what I was interested in.”

Christe also noticed that motivational shift from Dillard and credits it for much of his ongoing success. She truly believes that Dillard’s ability to connect with people in administration came from his early experiences at Wishard.

“Demetrius is very technically competent, but he has some really excellent interpersonal communication skills,” Christie says. “I think some of that comes from the lack of direction in the beginning. He has a lot of empathy and connection to people. That is truly where the shift happened. He started realizing that those are important skills. The technical stuff, you can learn it and use it, but the connecting to people and making a difference with the staff is what blossomed at Wishard and really where his strengths lie.”

Becoming BMET of the Year

When selecting a recipient for the AAMI/GE Healthcare BMET of the Year Award, a board of industry professionals evaluates nominees based on technical proficiency as well as leadership opportunities and progressive initiatives. Dillard exhibited all of these traits. A defining aspect of his resume is his time serving as president of the Indiana Biomedical Society in 2011, where he still serves as a trustee.

“The criteria we’re looking for is someone who really stands out,” Christe says. “Being exemplary technicians is good and something that we’re looking for—so excellence in technical skills and customer service—but we’re really looking for some leadership and some really exceptional opportunities. For Demetrius, the fact that he had been president of the Indiana Biomedical Society and that he had made presentations at AAMI helped him stand out in the crowd. The nominations are usually quite good. Typically, all of the candidates are excellent BMETs, but we’re looking for something that helps people stand out.”

In addition to Dillard’s work with the Indiana Biomedical Society, he also passed the CBET test in December of 2011 and aims to continue his education through the pursuit of an MBA.

“I see it as another level of influence,” Dillard says of his in-progress MBA degree. “I feel like the C-suite is just now getting to a point where they’re really starting to see the value in the clinical engineering field. I believe that, in our field, having a strong advocate in the C-suite is huge. The master’s degree allows me to move forward into administration and become either a chief information officer or chief technology officer.”

“Demetrius is a model for the education and attitude that we need to see in the technicians of the future,” says Karen Waninger, MBA, CBET, director, clinical engineering, Community Health Network, Indianapolis, who nominated him for the award. “He is willing to take ownership of making things happen, addresses situations directly, and works with all parties to assure aligned expectations, and communicates very effectively with individuals from all backgrounds.”

Remaining a Model for Success

Dillard has taken a fast track to the top of his profession, something that others are capable of but that few have achieved. His understanding of the politics of hospitals as well as the foresight to educate himself on networking and IT will also play an integral role in his continued success in the field.

“I think he’s taking the career path in a very different direction but one that many of us suspect that in 15 years we’re going to see more of, a merger between IT and clinical engineering,” Christe says. “I think that’s where Demetrius’ strengths lie, and he’s really using that to his advantage. Sometimes clinical equipment support does not have the status that it should. I think that the direct connection to the C-suite is going to improve that.”

Read past “Focus On” articles
—search our online archives.

To follow in Dillard’s shoes, his instructions are simple: stay open to all advice—critical or constructive—and opportunities. Though this may sound like obvious steps to becoming successful, Dillard’s example displays just how effective it can be in practice. He also encourages biomeds to stay open to accepting a mentor and on the technical side of the job, be mindful of doing things too hastily.

“Also, slow down,” he says. “That’s something that I had to take heed in. I have mentors that have told me that plenty of times. There is so much that can be done and will be done, and everyone has a part in that. If you allow yourself to move too fast, there’s something that should have been done that’s not getting done. Be patient and slow down. Make sure you cross all of your ‘Ts and dot all of your ‘Is.’ ” 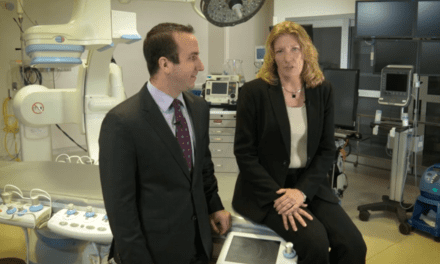