A biomed will often try to correlate a physiological function or feature to an electronic or an electromechanical function. This is a good practice, as it helps the technical person communicate with the clinical person. The nerves and nervous system can be thought of as a computer network. Think of the brain and spinal cord (the central nervous system) as the processor, while the peripheral systems, both voluntary and autonomic, are the network. Unlike a computer system, the nervous system handles both electrical and chemical impulses. The nerve cell, also called a neuron, has numerous fibers radiating from it in sizes ranging from a few thousandths of an inch up to 3 feet, as in the Sciatic nerve. The fibers of connecting nerve cells do not touch one another, but information can be transferred from one to another via a chemical reaction across the gap, or synapse, between them.

The nerve cell, also called a neuron, has numerous fibers radiating from it in sizes ranging from a few thousandths of an inch up to 3 feet.

Not all impulses reach the brain, as some are processed at junction points along the spinal cord and are rerouted via other nerves to muscles. A reflex occurs when the impulse from one nerve crosses the synapse to another nerve without ever reaching the central nervous system, causing a muscle to react. A conditioned reflex, such as walking or buttoning your shirt, is learned from repeated actions. These learned reflexes could be considered off-line processing, to use computer terminology.

The Peripheral Nervous System
Branching off the central nervous system is the peripheral nervous system, in which 12 pairs of cranial nerves carry signals to and from the brain. Branching from the spinal cord are 31 pairs of nerves: eight cervical (neck), 12 thoracic (chest), five lumbar (low back), five sacral (pelvic), and one coccygeal (tailbone).

The peripheral nervous system has two main subsystems: the autonomic system and the voluntary system. The autonomic system operates without signals from the brain and controls the various organs and glands. The voluntary system carries signals to and from the brain, controls the motor functions, and responds to outside stimuli.

The autonomic system is further divided into two subsystems—the sympathetic system and the parasympathetic system—which are controlled by the hypothalamus gland, located at the base of the cerebrum. The sympathetic system puts the body into a “flight or fight” mode by triggering various glands and organs to react to a stimulus; these reactions include the release of epinephrine from the adrenal gland and glucose from the liver. The heart and respiration rates also increase, the digestive rate decreases, and the sweat glands activate to keep the body cool during the activity.

The voluntary system includes three types of nerves. The sensory, or afferent, nerves carry information from the outside of the body to the central nervous system. This information is sorted, acted upon, and stored in the brain for future use.

The motor, or efferent, nerves carry information from the central nervous system to the various muscle groups; one nerve with its branching fibers may control thousands of muscle fibers.

The mixed nerves combine both voluntary and motor functions, and they are bidirectional.

Nerve-Monitoring Instrumentation
A working nervous system allows a person to think, feel, and act on many levels at the same time without confusion. When the system breaks down, it is often difficult to determine the exact cause, and it is even more difficult to fix it.

The nervous system can be impacted by trauma (to the brain, spine, or other nerves), inflammations of the brain or nerves, loss of blood supply, or infections. Nerves can be damaged by structural changes in the spinal column and degenerative disease such as myasthenia gravis, multiple sclerosis, and Parkinson’s disease.

The instrumentation used to measure nerve activity ranges from the very common, such as an electrocardiogram, which shows the results of a stimulus from a nerve to the cardiac muscles, to the uncommon, such as an electromyography (EMG). In an EMG, electrodes are placed over a specific skeletal muscle to determine the electrical activity while at rest, during a voluntary function, and with a stimulated function. The muscle is stimulated with an electric current to determine if the problem is located in the muscle or in the nerve. This is a painful test, and it is often used on people with ALS or polio.

Other uncommon instrumentation includes electroconvulsive therapy. Here, the patient is put under anesthesia with a muscle relaxant, electrodes are placed on either side of the skull, and the brain is basically defibrillated. The goal of the procedure is to cause a seizure of the central nervous system—basically, a “reboot,” in computer terms. This is done while the patient’s electroencephalogram is being monitored. This treatment is used on patients who do not respond to medicine, are depressed, or are in the depressive stage of a manic-depressive psychosis.

In the physical therapy area and pain clinics, the biomed will encounter various stimulators that are used to move muscles or to block pain. The transcutaneous electrical nerve stimulator (TENS) unit is used by many people. It basically emits electrical impulses to electrodes on the skin, creating a tingling, tapping, or massaging sensation. These actions are thought to block pain impulses from the periphery to the central nervous system, increase the production of endorphins, reduce muscle spasms, and improve blood supply to the affected area. TENS units have been used to promote the healing of surgical incisions.

Many research projects focus on how nerves and muscles interact, and new instrumentation is about to enter the market. 24×7

David Harringon, PhD, is director of staff development and training at Technology in Medicine (TiM), Holliston, Mass, and a member of 24×7’s editorial advisory board.

Assisting in the preparation of this article was Jillyan Morano, assigned by TiM to Winchester Hospital in Winchester, Mass. 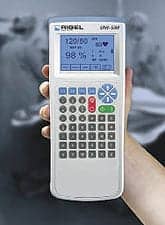