Basically, there are three distinct types of muscles: voluntary, involuntary, and cardiac. If a person loses muscle tone or control of their voluntary muscles, their lives radically change. It is very difficult to separate muscle problems from nervous-system problems in many patients. Many times, muscle problems are diagnosed and treated as nervous-system problems, and vice versa.

Human bodies contain more than 600 voluntary muscles, which are made up of fibers that vary in length from 1 mm or less to more than 10 cm. Each fiber has a nerve associated with it that controls various movements. The muscle fibers vary in shape, size, and color from white to deep red. All muscle fibers contain small amounts of glycogen, which is fuel for the muscle. Most muscles, especially the heart muscle, use fatty acids as fuel.

Heart of the Matter
The cardiac muscle is the most used and studied muscle group in the body. We routinely measure its electrical activity with an electrocardiogram (invented in 1903), measure its size and mechanical function with ultrasound (introduced in 1960) or x-ray (discovered in 1895), test it for various enzymes via blood tests, and listen to it with a stethoscope (one of the oldest medical devices still in use, demonstrated in 1816).

Flexin’ It
If you use pure electronics terms to describe a voluntary muscle’s action, they would be as follows: An electrical impulse from the nerve is converted (think transducer), into chemical energy, which results in the muscle fibers doing a mechanical activity (think transducer) of contracting or relaxing.

All voluntary muscles work in tandem with other muscles; as one contracts, the other relaxes. This fine balance of muscle activity is key to our survival. No muscle remains totally relaxed or totally contracted as long as a person is conscious. This state is often called muscle tonus, or tone. When a person loses consciousness, the muscles lose their tone, and the body crumbles to a position where no voluntary muscles are performing their functions; basically, you fall. Sometimes, some of the involuntary muscles will also change their state, and the patient may have a “voiding” accident.

Voluntary muscles are connected to bones (think walking and working), to other muscles (think bending or fine movements), or to the skin (think smiling). Bodybuilders work on individual muscles to get the “definition” that they desire for competitions, while athletes work on groups of muscles to gain what they want.

Basic Operation
Involuntary muscles are smooth, smaller than voluntary muscles, and react to various stimuli from the subconscious brain. These are the muscles that control our breathing, coughing, gagging, and other normal functions—such as opening and closing the pupil of the eye in reaction to light, and moving food through the digestive system. They do not tire, as voluntary muscles do, but they do contain glycogen and use some of the fatty acids in the bloodstream for fuel.

Out of Service
Muscles also protect internal organs, as they form the abdominal wall. They allow us to sit, stand, and walk, and they hurt when they’re abused. Most of us have experienced a muscle strain, usually from overworking a muscle group; a pull when the muscle is stretched longer than it should be; or a tear when some of the fibers are cut or torn. Rest is the cure for these problems. Conversely, if muscles are not used, they shrink in size or atrophy. In both cases, a physical therapist’s services may be needed.

David Harrington, PhD, is director of staff development and training at Technology in Medicine (TiM), Holliston, Mass, and a member of 24×7’s editorial advisory board. 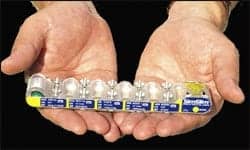