Living With DICOM: Imaging modality manufacturers and PACS vendors have moved far beyond where they were just a few years ago in getting their DICOM-dependent equipment to communicate.

"Once you get past the installation stage …”

Talk to BMETs and other radiology service technicians about the hurdles of DICOM (digital imaging and communication in medicine) when it comes to PACS (picture archiving and communications system) operation and sooner more likely than later you will hear that phrase.

It is a good thing in one way. It means that imaging-modality manufacturers and PACS vendors are way ahead of where they were a few years ago in getting their DICOM-dependent pieces of equipment to talk to one another. But there are still problems—sometimes big problems—with DICOM from a BMET’s perspective, both during and after installation.

DICOM is a code or a standard that has been adopted by manufacturers of imaging equipment to create consistent images and let imaging systems that must be interfaced talk to one another. It is the language that lets an MRI or CT scanner transmit images over a PACS so that radiologists can sit at workstations and interpret the images electronically.

But DICOM is more than a communications standard. It is an evolving world unto itself. The DICOM rules are continually under review and revision by a committee that operates under the auspices of NEMA (National Electrical Manufacturers Association) and the ACR (American College of Radiology). Over its evolution DICOM has gone through a number of versions, but it has stabilized on version 3.0. Some would say more-or-less stabilized.

“The only difficulty I have experienced has been with installation problems,” says Christopher L. Jones, Sr, BMET, MCP.

“With the new DICOM standards it is more consistent,” Jones adds. “The way all the manufacturers have got together on one standard is great. With the earlier versions there were printing problems with the different modalities going in. They had different DICOM versions but also different languages of the DICOM going in.”

Respondents for this story generally agree with Jones that DICOM with a basic uniform 3.0 is far ahead of the recent past when technicians hardly knew what DICOM renditions would show up. Even within version 3.0, however, there are subsets of coding that are not uniform and that still cause BMETs and other technicians long nights of tinkering and long days of pleading with vendors to make adjustments.

Phil Mininni works for Genesis Technology and is assigned to the Nebraska Medical Center in Omaha. “If I do have DICOM problems it’s usually after a new piece of equipment has been brought in. There are conventions that everybody is supposed to use, but not all DICOM 3.0 is the same. When one vendor says they are 3.0-compatible, they may send the data in a slightly different way than the receiving end is looking for in the header. Sometimes the receiver doesn’t talk to the modality, and then you have a blame fight between one vendor and another.”

Tags Different
Tim O’Dell, RT(R), is imaging project manager at Banner Health, a hospital network in Arizona. He is assigned to projects—including a series of PACS installs that will conclude in 2006—at six hospitals in the Phoenix area.

“There is so much that falls under DICOM that hardly anybody knows what it is,” he says. “For most DICOM 3.0, most vendors have functionality. The problems are usually not ‘talk’ problems. They’re more related to tags and the other information below the header.

“The tag could be pixel spacing, it could be annotation. Everything you see on an image is some kind of tag. Not all vendors use the same tag for the same thing. They have to map to their own software, so they basically take overlays that are generic to their system, which is what they think the user likes to see. But some things you would normally see on the film don’t show up on the PACS. We’re sending it and it’s not showing up on the PACS.

“So then you get copies of the DICOM conformance statements. You have to do a DICOM dump. You dump that image into a DICOM format so you can see what is mapped.”

O’Dell is right about the complexity of DICOM. The NEMA Web site (www.nema.org) offers 17 manuals on DICOM. The manuals range in price from the high double to the low triple digits. [A free soft-copy version of the DICOM standards can be downloaded from the DICOM Web site (www.medical.nema.org).]

When the problems have been isolated, O’Dell says, that is when technicians have to turn to the vendors.

“You may have to go to the modality vendor and say ‘Can you change these fields?’ But it’s on the PACS side where things are usually remapped,” he says. “It’s not as easy as it sounds. The PACS vendor usually wants to charge for it.”

O’Dell also says the process of making changes can take weeks or months. He cautions against taking as gospel vendors’ assurances that systems will interoperate.

“They all tell you there won’t be an issue, but they don’t get into the detail of image tags in their evaluations. It’s sort of been a lesson learned on my part. You have to get the DICOM conformance statements from the PACS and modality vendors. They are required by law to give them to you. Then you can at least go through and map what is being sent on what tag.”

Radiology Impact
If radiologists or clinicians who are accustomed to being able to measure on film find they cannot do so on PACS because the tag variations won’t allow it (an example O’Dell uses) or if other DICOM problems arise, it is usually the technicians who are in the line of fire.

Ellis says one of his toughest hurdles has been “the radiologists and their expectations. They think that everything is so easy. They are very demanding. They don’t know what’s involved and sometimes I think they don’t care.”

This was particularly true when he was under pressure to move DICOM images to a new night-reading radiology service with which the Freeman doctors had contracted. “We had our virtual private network tunnel go down. The nighthawks would hit a switch and it would lock up our system. I was up until 2:00 AM fixing problems.”

Still when system glitches occur it is often the radiology workflow that suffers most and that can translate into less than optimum patient care. Sometimes it isn’t just biomedical personnel and radiologists who get caught up in turf and culpability battles.

Michael Backof is a DICOM consultant for the main support group at the US Department of Veterans Affairs. He is stationed in Maryland and troubleshoots PACS installations throughout the VA system. He says information technologists can also be part of a three-way conflict between doctors, biomeds, and information technology departments.

“The biggest [problem] I run into,” Backof says, “is the animosity between radiology and IT. That’s one thing that makes a lot of the PACS implementations so hard. IT is not sympathetic to the workflow of the radiologists. They treat it just like any other hospital department. Backof says, ‘this support responsibility has been ours, and now you get the IT people edging in on it,’ but the VA says IT will support the PACS. In the commercial world the PACS support is more the responsibility of radiology.”

Backof agrees that most of the problems with DICOM occur during an installation. Like O’Dell, he blames vendors for inserting proprietary tags into the DICOM format.

“The thing you run into is private tags or enhancements in their software so their equipment only works with their other equipment. Usually, there is a low-level basic mode with thumbnail images, look-up tables, and things like that removed that can be configured between devices (for all vendors), and then everything talks.”

Education
O’Dell advises every hospital or health network linked with a PACS to develop an on-staff DICOM expert. He says there are a lot of DICOM classes available to BMETs and other technicians, and there is a lot of free information on the Internet, including software to troubleshoot DICOM interfaces.

“We assume too much that the vendor is going to do all the work up front for us. We need to get more people to DICOM classes,” he says.

Herman Oosterwijk couldn’t agree more. Oosterwijk is founder and president of OTech Inc, a Dallas-based educational firm that runs DICOM classes, among others. He has also published a book, DICOM Basics, which, he says, is not intended to be a comprehensive handbook or programmer’s guide for DICOM software implementers. Rather, it is a simple reference for people who like to understand the basics of the DICOM standard.

Oosterwijk says he is puzzled by a lower-than-expected turnout to his DICOM classes given that the BMET or other technician is so important to proper PACS functioning.

PACS provides images at a keystroke.

“Poor DICOM will break the workflow,” he says. “People then have to do things manually. Nobody in the typical hospital knows anything about DICOM, and they rely on the vendors to help them. Then it boils down to the vendors not doing their job.”

Oosterwijk says a lot of the problem isn’t vendors, though. It’s poorly trained technicians at the hospitals. “The service engineers often have no training in DICOM. More than half of all service engineers have no comprehension of DICOM. Those who come to my classes have no clue.”

Despite the need for training, the number of individuals who show up for study has actually fallen off in the past couple of years, Oosterwijk says. “I don’t see a flood of students, and I really don’t know why. It’s not always clear that the companies are taking any action to train.”

A decade ago x-ray technicians mostly just needed to know their modalities, he adds. “But now you have to know so much more. The modalities are a lot more software intense and you need to know about integration.

“I’m in the field a lot,” he says, “and some PACS installations hum along. In those cases it is the service engineer, always. These people are extremely important to the operation of the system, and PACS needs a lot of TLC. These systems are not maintenance light.”

Greg Swigart, BMET, is one who took up the educational challenge. He troubleshoots radiology equipment for the St. Luke’s Hospital system in Bethlehem, Pa, a four-hospital network. He took a series of classes that included material on DICOM.

“My director had the vision for us to be able to handle the radiology problems in-house,” he says, “but we had to convince the radiology management and senior technologists that place the service calls that we could handle them. I began making myself visible and asking ‘Is anything wrong?’ It took a while for the radiologists to accept my being able to do that.”

Once they were convinced, Swigart says, the hospitals lowered the level of their maintenance contracts on imaging equipment from a full vendor contract to a support contract.

Swigart is just one of about 14 biomedical technicians deployed in the four hospitals. “It used to take an hour or two to get to the vendors,” Swigart says. “Now the radiology departments call us, and we’re there in 10 minutes. We plan to educate ourselves enough so that when the warranties on the PACS equipment run out, we’ll be able to give the same response.” 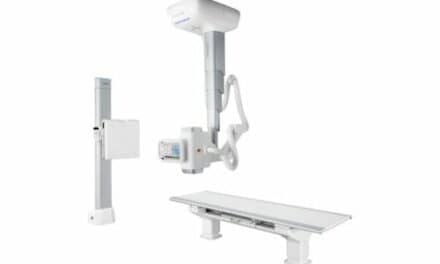 Pair of New Products May Speed Up X-Ray Calibration