The clinical laboratory area of a hospital contains a wide variety of devices—from the very simple heating block to automated chemistry systems.

In the simplest terms, laboratory equipment performs one or more of the following functions on a sample:
•    Measures by using light, ions, conductivity, weight, and color.
•    Separates by using electrical or rotational force.
•    Counts cells, particles, and events.
•    Changes specimens by heating, cooling, drying or reconstituting.

Sample preparation, delivery, and measurement are all functions that can have failure points, but always consider the human factor before assuming that the device has failed.

Because of high capital costs and changing technology, many of the larger devices are not owned by the hospitals but leased or obtained on rental basis, also called per-test rental/lease. On non-hospital-owned equipment, service support is generally part of the lease/rental agreement, so biomeds often only do incoming and visual inspections. In some cases biomeds may provide a “first look” before calling the outside repair service.

The Basic Functions
Sample prep. The sample can be diluted, mixed with a reagent, or filtered. This is often an automatic process where the samples are placed into special trays or racks and loaded into the analyzer.

Sample introduction and transport. The prepared sample is aspirated or injected into the analyzer, where it might be diluted further or have reagents added, and moved to the detector chamber. In discrete systems this is done with an internal pipetter. With a continuous-flow system, the samples are separated by air bubbles or water.

Processing. A microprocessor automatically compares and processes information taken from the detectors to make calculations.

Flushing. Flush automatically cleans the transport system and detector so the next sample is not contaminated by the sample just processed. On continuous-flow systems, the flush is part of the sample-separation system. On some units there is an additional flush that occurs after a set number of samples processed or time.

Display/printer. The results of each test on a sample are displayed on a CRT or printed onto a paper format. Some devices use both methods. If the printer is external to the device it may be part of the biomed service responsibilities.

Some devices also have the following parts:
System Connector. This communication port allows information to be sent directly to medical records, billing, and other systems in the hospital. Information systems personnel generally handle this interface.

Self-check/calibration. Automated systems have this function built in. It is run one or more times per day/shift. When present, this is a valuable source of information and needs to be checked before any troubleshoot is started.

External power conditioner or UPS. While major units are on dedicated power circuits, some do require power conditioners to assure stability of the power. In some hospitals a UPS may also be installed if the device cannot handle the power drop of 10 seconds or less between loss of power and the start-up of the emergency generators.

Blood Gas/pH Analyzer
With the widespread use of pulse oximeters, blood gas/pH analyzers in intensive care units and operating rooms are not as common now as in the past. Even so, blood gases are occasionally performed on patients. Blood gas samples are taken from arterial blood, so the patient either has an arterial blood pressure line in or the authorized licensed personnel has to perform an arterial “stick.” Because of the depth of an artery in the body, this is a painful procedure. In addition, the stick may not clot quickly, leaving the patient with a hematoma and associated bruising.

The arterial blood is drawn into a heparin-coated syringe that is placed in ice if it is not to be analyzed within 2 to 3 minutes.

The sample is injected into the analyzer where it enters a constant-temperature chamber (37°C) and is diluted. After temperature stabilization, it goes to the detectors, which have been previously calibrated with buffer solutions, where it passes three electrodes. These are ion-specific electrodes, one of which measures dissolved oxygen concentration in the blood, one measures the carbon dioxide level, and one measures the blood pH. Once the readings are obtained, the system flushes itself and injects a buffer to recalibrate the pH electrode and prepare for the next sample. Calibration gases may also be injected at this time to verify the accuracy of the other two electrodes.

The results of the tests are displayed, either on a CRT or as numbers on a digital display, and in most instruments on a printed record. On some units, the results might be electronically transferred to the patient’s medical record.

Common problems with blood gas/pH analyzers include out-of-date buffer solutions, no cal gases, poor flushing, paper jams, not taking the time to properly warm up the analyzer, and bad electrodes.

Biomeds should always do a self-test or auto calibration procedure before doing any troubleshooting on the device. These steps will generally indicate where the first problem is. After correcting the indicated problem, repeat the self-test and auto cal steps to determine if the problem has been resolved.

Clinical Chemistry Analyzer
Clinical chemistry analyzers determine the concentrations of electrolytes, proteins, metabolites, and drugs in samples of serum, plasma, urine, or other body fluids. According to the ECTI comparison charts, depending upon the make and model of the device, analyzers can perform between three and 255 preprogrammed tests.

In automated discrete systems, the fluid sample is placed into a rack or cassette where it might be diluted or have reagents added and mixed with the sample. During this process the samples could be warmed to match the temperature that is in the detection chamber, on some devices. The samples are identified and the record started. Bar codes are generally used to identify the sample and the patient from whom the sample came. The sample is moved to the detection chamber. On some units only one sample at a time is tested, while on others multiple samples are tested simultaneously. In cases in which the sample is carried in a cassette, it is moved past the detectors in a sequence that allows for the treated sample to be tested by the various detectors and with varying reagents. With this system, scratching on the cassettes can cause problems for certain tests and the mechanical positioning is critical.

More common is for the treated sample to be aspirated into the detection chamber, where the ion-specific electrodes and spectrophotometry is performed. It may take several samples to complete all tests, as different reagents could be used. After each sample is tested the detection chamber is flushed before the next sample is aspirated. If the flush is not total there can be “carryover” from the previous sample that could affect the results. In some units the samples are divided and separated by water, so there is a continuous flow into the detection chamber. The water used to separate the samples also serves as a flush. As the tests are performed, the results are computed and compared with normal limits before the results are printed/displayed. On some units any result outside of a normal limit is printed/displayed in a different color. Units can be connected to the hospital information system to send results back to the clinical floors/offices, to medical records, and to billing.

If the report printer is not built into the device it may become a service issue in some hospitals: Who takes care of the printer? Is it part of the contract on the device, a separate biomed device, or part of information services?

On many of the clinical chemistry analyzers, power conditioners/UPS and water treatment/filters may also be connected to the unit. Again there is a question of “ownership” when it comes to servicing these external devices.

The same principles and problems are present in all clinical analyzers whether they do a few tests per sample or many. By following the same troubleshooting procedures, biomeds can correct most problems without a making a service call to the vendor. Also, be sure to use the self-test/calibration features found on most devices before starting any additional troubleshooting. The problem is usually defined and the remedy outlined in the service manual.

David Harrington, PhD, is director of staff development and training at Technology in Medicine in Holliston, Mass.

Contributing to this article is John Roy, a Technology in Medicine biomed assigned to Women’s and Infants Hospital in Providence, RI. 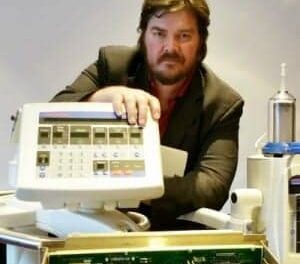