All of us are the sum of our experiences. From our earliest days, what we learn, how we learn it and the people we learn it from influence our choices. And nowhere is that more evident than in our choice of a career. (Certainly other considerations can figure in the equation. An athlete’s natural prowess and talent, for example, often steer him or her in the direction of a particular sport.)

David Scott understands that connection. He may not have analyzed or philosophized that dynamic, but he knew that getting the biomed department involved in a career-day experience offered possibilities for getting young men and women involved in biomed. So when The Children’s Hospital in Denver prepared its Career Day outreach program, this biomed manager signed up — a first for the department. The event, held in the hospital — not at a high school or a neutral location — featured guest speakers, including a critical-care physician; tours of hospital departments; and visits to “hands-on stations” set up in a main area of the hospital.

As it turned out, a total of 49 high-schoolers participated in the Career Day held just a couple of months ago, in November. Of those 49, eight had expressed an interest in biomed. And, according to Scott’s account of the day, biomed was ready for them.

Scott, who is vice president of the Colorado Association of Biomedical Equipment Technicians (CABMET), along with other CABMET officers, talked to the eight, then introduced them to some of the tools of the trade. The students dismantled a defibrillator and syringe pumps. They looked into microscope optics. They learned about pulse oximetry and blood pressure by hooking up to patient monitoring systems and taking their own readings. They got acquainted with biomedical test equipment by hearing about its use and seeing it used. As Scott says in the story on p. 8: “They signed up beforehand, and I don’t think they knew anything about it, but I think they left knowing a little bit more about biomed and what we do.”

Scott says he has since told the hospital’s education coordinator that biomed intends to participate in the Career Day programs scheduled for February and April of this year. But he’s also on a crusade to spread the gospel of biomed outside the hospital walls.

He has addressed students in the electronics program at a local high school. He is trying to interest students with a year of electronics education under their belts in the biomed internships offered by his employer, Hospital Shared Services (Denver). And, in a triple threat, he plans to talk to other Denver-area hospitals about any biomed internship opportunities they may be able to offer to qualified students.

Scott remembers a time when Denver didn’t have to scour for biomeds. Those were the days when Colorado was home to biomed training programs for the Army and the Navy that have since relocated to Texas. In an effort to make the most of current opportunities, however, he finds himself talking about biomed in and out of the hospital, and trying to connect with students of electronics who are contemplating their career choices. 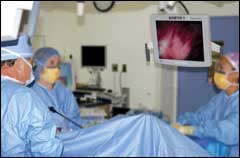