Alright, maybe I’m just being a stickler – call me a nerd, even – but I’m getting fed up with variations on 24×7 that fail to add up.

You don’t have to be Stephen Jay Gould to work this out. I think everyone tries to say the same thing – all day, every day – and I would suspect that the people trying to use the various gyrations of the term were exposed to some basic arithmetic during grade school, so why is it so hard to get this thing straight?

Pretty simple. The notation is familiar to anyone in the sixth-grade and anyone working in a lumber yard. Area equals length times width. Time covered equals hours times days. (Hopefully with beeper pay!)

And as simple as this concept is, it confuses copy writers across the land.

The most prevalent variation is “24/7.” To me this means 24 hours divided by 7, or 3 hours, 25 minutes and 44 seconds. That’s a pretty good schedule! The solidus, or forward-slash, has not always signified division. In the old Fortran days, when Teletype machines were being used to enter data, there wasn’t a division sign on the keyboard, and the solidus stuck. Perhaps if someone had spent more than 3 hours, 25 minutes and 44 seconds on the problem, we would have a better symbol.

I see a lot of “24-7” out there. That’s a pretty tough gig if you had to work all seventeen hours of the day, but it’s a little shaky for a service contract and would never fly if you’re tied to a 4-hour response time. However, I’ve known a few on-call people who were unfailingly able to sweet-talk the 11-7 shift nursing supervisor into putting the problem off until morning, so I guess their coverage was 24-7.

Then there is “7×24” which may be a failed attempt to adhere to the ISO 8601 date format (“year.month.day”), but to these old eyes that sat through too many math classes as physics major, and then as a computer science major (and quite a few other majors), “7×24” corresponds to a relaxed month’s effort – you get a nice lunch break, but you have to work a couple of Saturdays.

At the Detroit Auto Show last year, Ford gave us an Internet-enabled concept coupe/truck/wagon called “24.7”. Maybe they thought the idea wouldn’t last much longer than a day.

I’ve seen “24×7” on healthcare technology service contracts for over 20 years and it has always been a point of pride to me. There aren’t many industries that consider all-day, all-night, every-day-of-the-week coverage to be the starting point and I often brag about the responsibility that comes with our jobs. That’s why this magazine is called 24×7 and not 9 to 5. When I see erroneous convolutions of the formula bandied about pop culture, it reminds me that each year, more moth holes appear in our full-coverage healthcare tapestry; weasel clauses in coverage that cause late-night trauma teams to doubt our sincerity. It’s not a good trend.

I’m reminded of Steven Wright’s story about seeing a store with a sign advertising “Open 24 hours” and noticing the owner was locking the door. Wright challenged him, “The sign says you’re open 24 hours.”

The store owner replied, “Not in a row!” 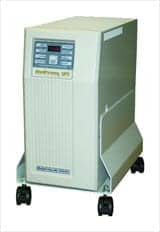